I should try to open my heart and pay to see Randall Wallace‘s Heaven is For Real, which has pulled down $28.5 million since opening last Wednesday. But I’m very reluctant and I probably won’t. In part because the 53% Rotten Tomatoes rating obviously indicates a degree of mediocrity. I also find the Christian belief that you can get into Heaven only by accepting Jesus as your one true savior (sorry, Muslims, Taoists, Buddhists and Satan-worshippers!) to be completely despicable and ridiculous, and donating $15 to the cause would give me indigestion, I think. Compassionate liberal Christians are cool but conservative hinterland Christians are, I believe, clueless phonies and sanctimonious prigs whose core values and loyalties are aligned with whitebread Republicanism, and that makes them pretty close to vile in my book. 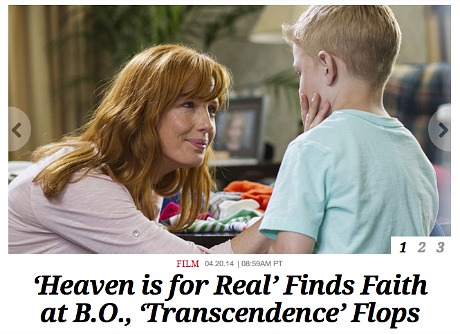 Not to mention the above still of Kelly Reilly beaming gentle love into the eyes of her young son Colton (played by Connor Corum)…I’m sorry but I can’t stand the idea of watching a film that pushes this kind of treacly family sentimentality. But I suppose it’s possible there are spiritual values in this film that might be worth pondering, and that I’m not giving the damn thing a chance because of my profound loathing of rightwing Christians, whose beliefs and lifestyles would make Yeshua retch if he ever re-appeared and saw what had been created in His name.

I would be honestly surprised if any HE regulars paid to see Heaven Is For Real but if they have and would like to share, please do.

I like the following passage from David Edelstein‘s New York review, to wit:

“I saw Heaven Is for Real in a Brooklyn multiplex at 9:50 p.m. on a weeknight. I thought I’d have the place to myself, but the theater was half full, and no one talked during the movie. They were especially riveted in the scene where Colton takes his father to a pediatric oncology wing and — as if he knows exactly who he’s looking for — zeroes in on an ashen, emaciated boy who can no longer speak. Colton tells the boy it’s going to be okay, better than okay. He has seen where the boy is going and knows that nothing bad will happen to him.

“I doubt many things — almost everything, to be frank — but I have no doubt that my Heaven Is for Real audience slept better that night. Whatever works.”

April 20, 2014by Jeffrey Wells24 Comments
« Previous post
Dark Subject, Pretty Music
Next post »
“No, But I Feel Guilty About It”