This morning I received an email from Criterion’s Peter Becker about the forthcoming Bluray of Richard Lester‘s A Hard Day’s Night, which was mastered off the original negative and allegedly will look and sound better than any previous version. (The TCM Classic Film Festival will show the Criterion version on the big TCL Chinese screen on Saturday at 6:30 pm.) But, as explained yesterday, I have a problem with Criterion’s decision to go with a 1.75 aspect ratio, which will needlessly trim off the tops and bottoms of the 1.66 version that has been in circulation for many decades.

“In pure technical terms this new restoration is in another league from any version of A Hard Day’s Night that has been out there before,” he began. “The source we used for the most of the film is the original negative, which is gorgeous. The film has been scanned at 4K resolution, meaning we have massive amounts more information to start with than [what] you have in a simple HD transfer, so the detail in the original negative is rendered with incredible accuracy. All the restoration work was completed at 4K resolution, which means we had extremely fine control of the restoration tools.

“And finally it’s A Hard Day’s Night (!) so you can be sure everyone involved had enormous pride in this work and took great care. The soundtrack you’ll hear at [the] TCM [screening], I believe, will be the elegantly executed 5.1 mix made expressly for this release by Giles Martin, but the home video editions will [also] feature a restored original mono track (remarkably improved) and a Giles Martin stereo mix as well. All the work for both picture and sound was approved by Richard Lester. These are all firsts, I believe.

“To answer your question about the aspect ratio, the film was originally released at 1.75:1. Lester confirmed it to us personally, and the film says so as well. We did go so far as to show the film in a more open 1.66:1 presentation to Mr. Lester, just in case, but he told us he prefers the original 1.75:1 framing.

“I hope this answers your questions. All the best, Peter.” 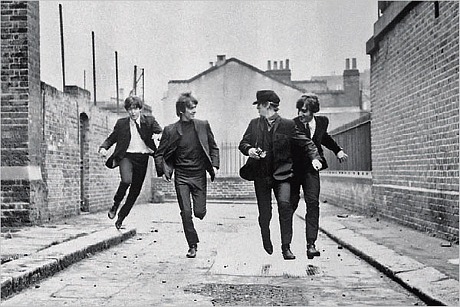 “Thanks, Peter. Much appreciated. I’m very much looking forward to Saturday’s screening. I have one question, though. Actually, two questions. Well, three or four.

“It’s heartening to know that you guys showed Richard Lester a 1.66:1 version as an option, which obviously means you were potentially cool with presenting your Hard Day’s Night Bluray that way. That was very liberal and comme ci comme ca of you. But Lester said he preferred 1.75 and the leaders said 1.75, and so the most narrowly defined and confined version of this classic film will now be the standard bearer.

“This is a completely arbitrary call on Lester’s part, of course. It basically boils down to an 82 year-old guy saying ‘I like this version better because I do.’

“As a longtime fan of this film, may I say something? I like the 1.66 version much better, and so do millions and millions of fans, even if they don’t precisely know it. And I think Lester, due respect, was needlessly dickish in making this call.

“Lester doesn’t own this film — he just directed it, big deal. What does that make him, the King of Siam? And Criterion doesn’t own it either — it just has the video rights for the time being. You know who owns this film? We do. The fan base does. Beatles fans young, middle-aged and old. People who’ve been watching and re-watching and celebrating ‘the Citizen Kane of juke box musicals’ for the last 50 years.

“If you ask me Criterion and Lester have very slightly diminished the Hard Day’s Night experience — slightly but significantly.

“Aspect-ratio debates always occur in a very arcane and cloistered realm, but by the language and aesthetic of aspect-ratio theology I think Lester has vaguely betrayed his own film, and that you and yours have aided and abetted him. There was no need for 1.75 — none at all. Because when it comes to restoring films released between April 1953 through the mid to late ’60s (i.e, a volatile period when aspect ratios were varied and in flux), more height is almost always right. If the extra height is there and it doesn’t hurt anything, let it happen. As John Huston might have said, ‘Let there be light and space and headroom.’ As long as you don’t see dangling boom mikes, where’s the harm?

“I’ve been looking at 1.66 versions of A Hard Day’s Night on DVD and Bluray for the last dozen years or so, and as a former projectionist I know for a fact that it was shown at 1.66 in many, many U.S. cinemas (apart from those who carelessly showed it at 1.85) when it first came out. The hard fact is that you and yours have elected to present, with your upcoming Bluray, slightly less of A Hard Day’s Night than any previous home-video distributor has offered so far.

“As you know, the film has consistently been presented with more height in the past. Criterion itself released a laser disc version in the ’90s that went with a 1.33 or 1.37 aspect ratio. Are you telling me that the Criterion people in charge, back when Criterion was a Voyager operation, didn’t know or care that the leaders said 1.75 when they mastered the film? I agree that presenting a 1.33 or 1.37 version probably wasn’t necessary, but at least they erred on the side of liberalism and headroom. 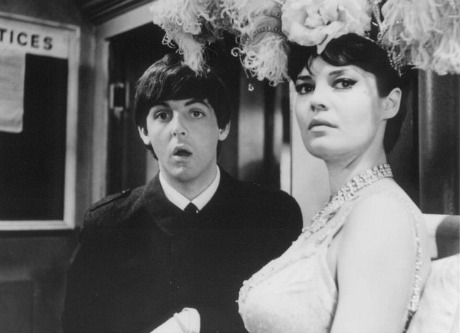 “As you also know, the people who mastered and scanned A Hard Day’s Night for the Miramax DVD in ’02 and the Alliance Bluray went with 1.66. It is this ‘taller’ version (along with the Criterion laser disc version plus the various VHS versions and broadcast airings) that the fan base has gone by for decades. But we’re now in the 21st Century, and the Criterion Bluray selling-point, apart from the upgrade in image and aural quality (which sounds terrific — don’t get me wrong) is, aspect ratio-wise, A Hard Day’s Less.

“As you know, 1.66 maskings for British films made in the ’60s are entirely common and par for the course. Criterion mastered its DVD of This Sporting Life (released a year before A Hard Day’s Night) and Bluray of Sunday Bloody Sunday at 1.66. Yes, 1.75 was technically correct if you want to be a stickler about it, but for decades responsible professionals in the home-video business (yourselves, Miramax, Alliance, TV broadcasters) have ignored this suggestion, and rightly so if you ask me.

“What was Lester thinking? What did Lester feel is the upside in slicing the film down? How exactly does the film gain by trimming the tops of heads and the bottoms of this, that and the other?

“Do want to know a secret? It doesn’t gain a thing by being cropped to 1.75. How could it? It doesn’t lose big within this a.r., but it is a slight loss.

“Is it a tragedy that A Hard Day’s Night is being presented at 1.75? No, not really. I’ll get used to it, live with it, etc. But it’s very unfortunate, and it is, make no mistake, a slight desecration. I’m just glad I own the 1.66 Alliance Bluray, which doesn’t look or sound too bad, even though it’s 1080i and is afflicted with ‘combing.'”

“Cheers, all the best and no offense — Jeffrey Wells, Hollywood Elsewhere”