It’s good that I crashed around 2:30 am Paris time (8:30 pm and 5:30 pm in New York and Los Angeles, respectively) and woke up around 8:30 am. That means I’m already into the European clock and that jetlag will not interfere by the time the Cannes Film Festival begins next Wednesday morning. But I left a few points dangling or unmentioned after tapping out my Godzilla review, to wit:

(1) I didn’t mention the human characters or performances because I found them perfunctory while watching the film at Le Grand Rex, and I felt no after-enthusiasm when I filed around midnight. I understand that director Gareth Edwards is a Steven Spielberg fan and therefore feels compelled to (a) focus on a traditional family unit (Aaron Taylor Johnson, Elizabeth Olsen and their zombie-eyed son) as the central blah protagonists, and (b) place Johnson (as Naval bomb-defusing specialist Ford Brody) in the center of the storm by virtue of portraying the alienated, once-resentful son of nuclear-power official Bryan Cranston and his wife-partner Juliette Binoche, both of whom had encountered a huge seismic disturbance at a Philippine nuclear-power plant in the late ’90s. I felt that Ken Watanabe‘s Dr. Serizawa (a nod to Akihiko Hirata‘s Dr. Serizawa in the 1954 Godzilla) was as rote as this kind of scientific-authority character can get. I was happy to see that Sally Hawkins, who plays Watanabe’s partner/colleague, Dr. Vivienne Graham, had landed a serious paycheck role. Don’t even talk about David Straitharn‘s military commander role, which is about nothing but rote ramrod speechifying.

(2) Somehow the spiders-from-Mars Alien Queen snapping-turtle monsters (i.e., MUTOs) are capable of generating an EMP (electro magnetic pulse) effect that knocks out all power. I still don’t understand how or why this happened, but I enjoyed the EMP idea. I also understand, of course, that it’s a lot cheaper and easier to create believable FX sequences if you stage all your attack sequences at night, which is what Guillermo del Toro did in Pacific Rim and what Edwards and his VFX teams have done here.

(3) Last night on Twitter I unfairly criticized Grand Rex management for not seating anyone in the orchestra and mezzanine sections, and only in the old-fashioned 45-degree-angle balcony (which reminded me of the super-balconies you used to see in the old Rivoli, Warner, DeMille and Leows State theatres in the 60s). I didn’t realize at the time that an elevated mega-sized super-screen would unfurl just before the show began and that the regular-sized, orchestra-level screen would be ignored and immaterial. I was hugely impressed when the super-big screen started to incrementally appear. “Now, that‘s showmanship!,” I muttered to myself. 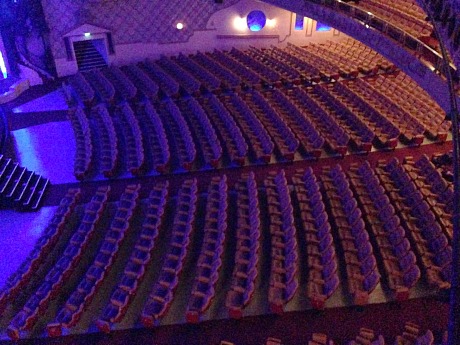 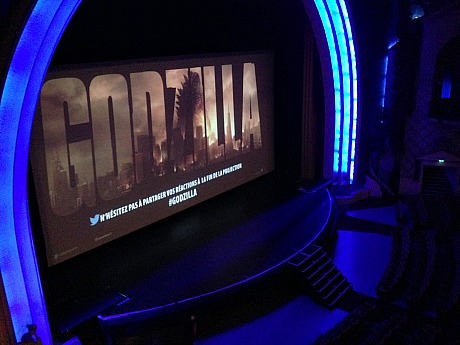 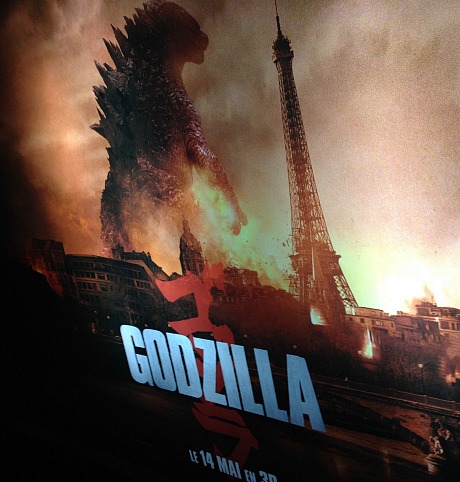