The common assessment was that Doug Liman and Tom Cruise‘s Edge of Tomorrow is an inventive, highly diverting Groundhog Day-meets-D-Day-meets-Starship Troopers, and that it would do bang-up business. Clearly a huge hit waiting to happen, or at least a pretty big one. But it did only moderately well. It didn’t quite top $30 million and therefore came in third behind The Fault In Our Stars ($48 million) and Malificient ($33 million). (The upside is that Edge did $82 million overseas.) Boxoffice Mojo reported that Edge‘s Friday tally of $10.7 million “was lower than Cruise’s last movie Oblivion ($13.3 million) and last August’s Elysium ($11.1 million).” It doesn’t figure. Will it have stronger legs than Stars and manage a bounce-back next weekend? Did a portion of the potential audience believe that Edge might be too similar to Oblivion (futuristic battle scenarios) and figured it was just more of the same? Or has something happened to the Cruise brand? I only know this was unexpected and in fact feels like a bit of a shocker.

Yesterday afternoon I was standing in line at a Best Buy checkout line, and I suddenly felt the too-close presence of the guy behind me. I turned slightly to check him out. He was Latino and heavy-set with a foggy-eyed expression, like a slightly overweight Michael Pena on too much Percodan. And wearing low-rider threads — crummy-looking T-shirt, baggy pants, 99-cent store lace-ups. What struck me was that he wasn’t standing steadily but seemed a tiny bit woozy and unsure of his balance. Was he bombed? Possibly, but that seemed like a bizarre thing in the mid-afternoon inside a big, bright, antiseptic environment like Best Buy. All I knew was that he was violating my 18 inches of space. He would be 24 or 30 inches away and then lean forward and shift his balance and suddenly his head would be less than 12 inches away. Once or twice I felt his breath on the back of my neck or arms. Fuck’s your problem? I turned around and glanced again. This guy’s obviously a psycho, I told myself. Don’t say anything, don’t eyeball him….just chill down and pay for your stuff and let it go. But what kind of asshole can’t stand up straight and observe the 18-inch rule, which is recognized the world over?

It was reported two or three days ago that Denzel Washington is in talks with MGM to star in an Antoine Fuqua-directed remake of John Sturges‘ The Magnificent Seven (’60), itself a remake of Akira Kurosawa‘s Seven Samurai (’54). Denzel would presumably play Yul Brynner‘s gunslinger character, a.k.a. “Chris.” Great idea but then it got better when Terry McCarty tweeted yesterday that he’d love to see Tom Cruise portray Steve McQueen‘s role, Vin. Excellent idea! Can you imagine Cruise and Washington trying to outbox and out-maneuever each other? Not to mention the old-fashioned allure of a couple of stars twirling six guns and leaping over adobe walls, etc.

Cruise would never play second-banana to Washington — to do so would be seen as a tacit admission that his big-star days are over. On top of which Cruise’s pride has presumably been hurt by Edge of Tomorrow coming in third this weekend (it made less than $30 million compared to $48 million earned by The Fault In Our Stars). His back is against the wall and now he’s got something to prove, which is that he’s still got the big-star box-office clout that he’s enjoyed for 30-odd years. In this scenario Cruise lacks the confidence to do something outside the box like play McQueen’s role, etc. But it would be great if it came together.

I enjoyed reading Scott Feinberg‘s 6.6 Hollywood Reporter interview with Jerry Lewis, which was basically about publicizing Paramount Home Video’s Nutty Professor Bluray box set, which streeted on June 3rd. Feinberg is always well-prepared and in the zone when he interviews old-time Hollywood legends, and he holds his own with the sometimes cantankerous Lewis. Lewis will eat you alive if you haven’t done your homework. You need have your shit wired tight and then some. I know, having interviewed the guy back in ’95. 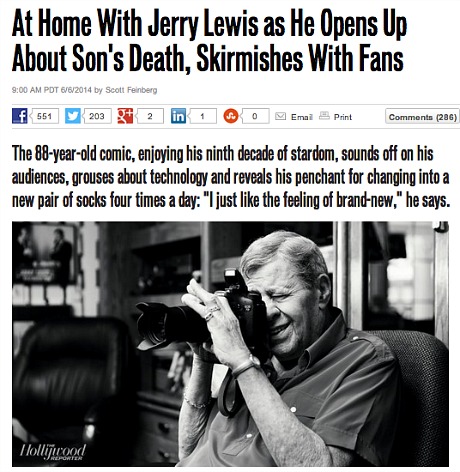 The best take-away is Lewis mentioning that he changes his socks four times day because it makes him feel renewed. Obviously an extravagant habit. To do that you’d have to own…what, at least 30 pairs of socks that you like? (Most of us have a few pairs of cool socks and several more pairs of what-the-hell, nothing-to-shout-about socks.) If you only owned 30 pairs you’d have to wash and dry them two or three times per week. If you owned 50 pairs you wouldn’t be such a slave to the wash cycle. I immediately decided to try a variation. Henceforth I’m a two-pairs-per-day man. Managable. Change in the late afternoon or early evening. Thanks to Lewis and Feinberg for the idea…seriously.