A director friend who knows people says he’s “hearing on pretty good authority they’ll be using CGI to put Harrison Ford’s face on a body double, probably his usual stunt double, so he’ll be able to complete his Star Wars, Episode VII role no matter what the state of his recovery will be.” CG face-pasting was a big deal 14 years ago when Gladiator technicians brought Oliver Reed back to life for scenes he hadn’t shot at the time of his passing. The late Paul Walker was recently CG’ed for unfinished Fast and Furious 7 scenes, etc. The Ford work, if and when they actually decide to do it, will presumably be less difficult given the fact that he’s alive and relatively well.

Here are two stories — one from Techtimes, another from Latino Review — that indicate why CG face-pasting might be necessary. They’re both rumor-riffing that Ford’s busted leg has really screwed things up schedule-wise, and that JJ Abrams wants to bump the Star Wars, Episode VII release date to May 2016. But Disney’s Bob Iger has allegedly ixnayed that one in the bud. He wants it out in December 2015, come hell or high water.

There are two major bomb explosions in Richard Lester‘s Juggernaut (’74), and yet the viewer never sees the explosion or the damage to the hull of the cruise ship Brittanic. Obviously because the producers couldn’t afford it. It half works but not really — such an omission would never be tolerated today. One of Richard Harris‘s more arresting lines in Juggernaut is “I may be stupid, but I’m not bloody stupid.” Quentin Tarantino re-used this line in Grindhouse (I think it was spoken by Rosario Dawson?), but “bloody” doesn’t quite work with an American accent. Kino Lorber is bringing out a Juggernaut Bluray on 9.9.14.

Hollywood Elsewhere is proud and gratified to announce that visionary tough-nut director Darren Aronfosky has joined Guillermo del Toro, JJ Abrams, Alfonso Cuaron, Rian Johnson, Alejandro Gonzalez Inarritu and Matt Reeves in agreeing to sign that “save the 70mm Alamo” letter. (I’ve explained the situation too many times now so here’s the link.) More reach-outs on Monday. Alamo nut Phil Collins was recently quoted as saying he hasn’t been asked to lend support so maybe he might if asked? Here’s an update from Digital Bits editor Bill Hunt, a post from Obsessed With Movies’ Bill Desowitz, and a Facebook plea from David Nevols.

Eugene O’Neil‘s Long Day’s Journey Into Night has nothing on the raging feline tempest caused by yesterday’s arrival of Jazz, an 11 week-old ragdoll. You can cut the hostility with a butter knife. Mouse, my obese Siamese otherwise known as “Fatty”, is seething with resentment. He’s done nothing but snarl and sulk and give me death-ray looks. Even Aura, the alpha-vibed white munchkin, is hissing at Jazz and she never gets angry at anyone. I don’t have a logical reason for bringing Jazz home. I knew it wasn’t the smart thing to do, but I did it anyway. 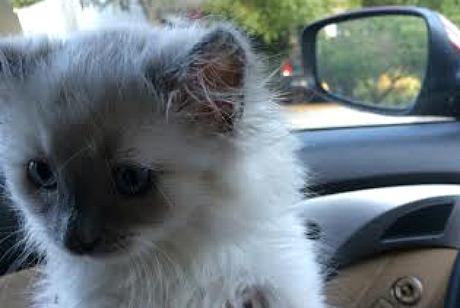 Here’s another one that went by me the first time. Six weeks ago Bill Maher sat for an interview on Larry King‘s “Politicking” videocast, and somewhere around the halfway point Maher suggested the possibility of a Hillary Clinton-Elizabeth Warren “granny” ticket. I felt a little energy surge when he said this. Everyone is presuming Clinton will win because of the historical gender card, but nobody’s in love with her. She’s generally perceived as a moderate corporate-backed liberal centrist who will, at best, “address” income inequality and climate change without really getting tough about it. One result is that there doesn’t seem to be much strong support for Clinton among Millenials or progressives. Warren as HRC’s vice-president could remedy that situation to some extent. Warren will at least arouse a little passion. Does a granny ticket make sense to anyone in this corner?

It was announced a day or two ago that Neil LaBute‘s Reasons To Be Pretty will have a month-long run at the Geffen Playhouse (i.e., the Gil Cates Theatre) from 7.29 to 8.31. Nick Gehlfuss, Shawn Hatosy, Amber Tamblyn and Alicia Witt under director Randall Arney. The news naturally recalls my 2009 viewing of LaBute’s play on the Broadway stage, and my initial reaction and then how I got into a rough-and-tumble with a Jezebel editor. LaBute’s play hinges on a guy offering a careless (if not necessarily malicious) remark to his girlfriend, which is that she’s “regular” looking. I wrote an interpretation about how this remark, however tactless, wasn’t mean-spirited. I offered a view that women in the looks realm of A-minus to C-plus are actually more desirable given the likelihood that they’re probably (though not necessarily) more spiritually developed than A-plusses, double As and triple As as a general rule.

There are two…well, technically three versions of The Disappearance of Eleanor Rigby (Weinstein Co., 9.26) — a Him/Her version (which constitutes two films) and a Them/mashup version. I didn’t see The Disappearance of Eleanor Rigby: Him and Her at last September’s Toronto Film Festival, but I know it took 191 minutes to tell the same breakup story from the differing perspectives of James McAvoy and Jessica Chastain‘s characters. Word around the campfire is that Him/Her is a more interesting film than the 123-minute Them, which tells the same tale in a generic, neutral-ish way. In any event I saw Them last May in Cannes, and I can tell you three…no, four things:

(1) Them is an intimately rendered, believably performed adult relationship piece that “does it right,” for the most part. It’s about character and trust and need and longing and trauma, and it deserves all the nice things that have been said about it. As such it casts…how to say it?…a certain favor upon director-writer Ned Benson, at least in terms of how it feels as it moves along during the first hour. Benson is one of the good guys — a smart, mature filmmaker who’s tried to make and in many ways has succeeded in making the right kind of subtle, sophisticated troubled-relationship film;