I Can Be Bought

In response to last week’s arrival of a hooded sweatshirt promoting Bennett Miller‘s Foxcatcher (i.e., the very first Oscar swag package of the 2014/15 Oscar season), allow me to slightly amend or modify the first paragraph of my initial Foxcatcher review, which I posted from Cannes on 5.22. 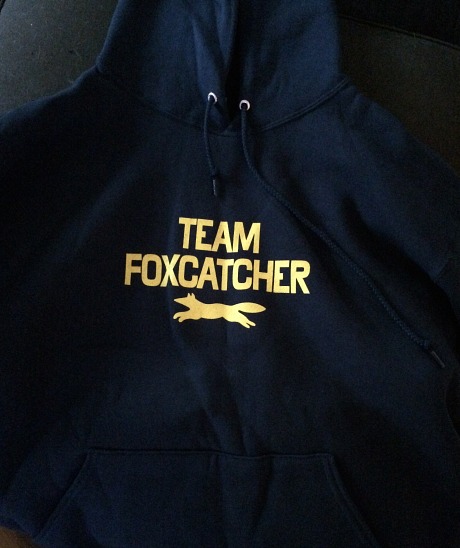 Amended version: “Speaking as a devoted admirer of Bennett Miller‘s Capote and Moneyball, it gives me no particular pleasure to state that Foxcatcher is a very well crafted, psychologically acute downer of a murder saga. Why play games or mince words? It’s obviously a quality package, but it’s not about fun and games. There’s no doubt that Foxcatcher is very strong and precise and clean, especially as crime dramas tend to go. And I respect the fact that it contains undercurrents that stay with you, and I certainly respect and admire what Miller has done here with his deft and subtle hand.

“But the obviously intelligent Foxcatcher is a relentlessly bleak trip that, accomplished as it is, isn’t especially lovable or enjoyable. Okay, I ‘enjoyed’ and ‘liked’ it as far as it went. It’s too well made and well-performed (especially by surefire Best Actor contender Steve Carell) to be anything but respected. But it’s basically a grim study of a dark tale about victims and affluent malevolence and corrupting wealth, and about fate surrounding the characters like tentacles and sucking them down the drain.”

Not much of a modification, I admit, but I do want to emphasize, with or without the addition of a nice new sweatshirt to my wardrobe, that Foxcatcher is a class act top to bottom.