Remind Me Again What “Story” Means

A little less than eight years ago I posted a qualified rave about Michael Mann‘s Miami Vice. I made a big passionate deal about the “fumes” in this film, and have taken a lot of shit for using that term ever since. But it’s one of the better-written reviews I’ve ever posted, I feel. I did a nice job of qualifying my praise, and it’s not easy to do that fairly when you’re talking about an 8 rather than a 9 or a 10. I own a Bluray of Miami Vice but I haven’t re-watched it in a long while. Seasons change, things fall away and you move on. But now I’m committed to going there again and experiencing what happens. Here’s the 7.11.06 review in full: 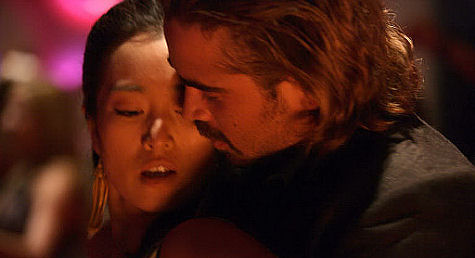 Michael Mann‘s movies are so good and so Rolls Royce that when a new one comes up 8, it’s an easy 9.5 or 10 by everyone else’s standards. If you know his stuff, you know what I’m saying is true. I’m not using the Rolls Royce analogy casually. The elation I felt yesterday from Miami Vice (Universal, 7.28) wasn’t just about tromp-down speed or engineering or a perfectly-tuned engine — that’s standard content in any Mann film. And it wasn’t quite about the sadness and the soul, which is in this film but not in the abundant qualities found in Heat and Collateral and The Insider.

I’m talking about the fumes. The fumes of Miami Vice — the aroma, the grit, the atmospheric stuff, the digital flavor of Dion Beebe‘s here-and-there photography — are superb (and sometimes in a realm so special I can’t quite describe it), and this alone makes it the supreme commercial “ride” movie of the summer.

By this I mean my kind of two-hour popcorn movie…an exquisitely configured, not-too-taxing thing for people who are smarter, hipper and more seasoned than the mainstream squealies who went nuts for Pirates 2. It sounds elitist to say this, but…

I’m talking about a crime movie that just roars in and does the job, but lingers on with so many different little moods and tones and accents and side-excursions that, like all first-rate films, it’s clearly up to a lot more than just “story” (and the more I write about movies the less I know what that term really means). 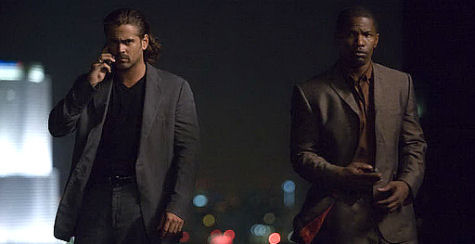 I was never that much into Mann’s Miami Vice back in the mid ’80s, so I wasn’t sitting there yesterday afternoon going “this is new” or “that’s cooler”. Forget Don Johnson and the other guy whose name I’ve never been able to remember, and who I’d rather not look up on the IMDB because that will somehow kill the mood.

Miami Vice is right table-slam now…a combination of big expense (Universal is copping to $135 million), sweat-zone cool and wow photography, all focused on a kind of saxophone-solo story about a couple of Miami detectives looking to burn some very serious drug dealers by way of an undercover operation — a piece of elaborate theatre in which the cops pretend to be bad guys.

The way it’s been shot and cut is mainly about set-up for the first half (or do I mean two-thirds?)…mutterings, maybes, sex, whispers, half-understood’s and the radiant Gong Li, who is back at the top of the list of all-time hotties with this film — and then Big Payoffs happen during the last 30% or 35%.

Colin Farrell‘s blonde hair in this film is much better — greasier, more lived in, more in synch with his age and his Irish-ness — than it was in Oliver Stone’s Alexander . Sounds like a mundane nonsequitur, but sometimes the authority of movies can be measured by such things. 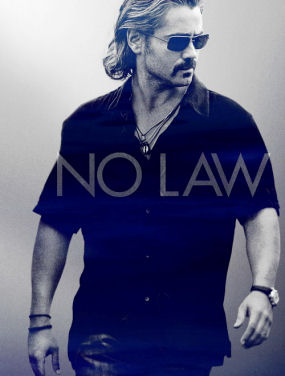 Drink a strong cappucino and be well rested before you see this thing — you’ll need to pay close attention. All good movies are calibrated to stay a wee bit in front of what you think you know is going on — if this isn’t done boredom sets in. But my feeling during the first half (and I’m describing this with respect) was along the lines of “whoa, wait a minute…what’d he say? Is this Haiti or…? Rewind those last two lines…oh, I get it…well, most of it.”

Beebe’s photography (like Collateral, most of Vice was shot with a Thomson Viper) is, as you may expect, nervy as shit — at times conventionally appealing, at times “pushed” and flecked with grain, but always sensual and photochemically “real” in a way that never stops being exciting or enticing in some “off” way.

Who, exactly, are Farrell’s Sonny Crockett and Jamie Foxx‘s Ricardo Tubbs? Foxx/Tubbs seems like a relatively at-ease guy in love with his lady (Naomie Harris) but Farrell/Crockett is the kind of guy who doesn’t know what kind of guy he is outside of the rush of the job.

That’s what makes his falling in love with Gong Li’s Isabella, the girlfriend of big-time drug lord named Arcangel de Jesus Montoya (played by Luis Tosar, a balding, bearded guy with the most piercing eyes I’ve seen anywhere in a long time), so I-don’t-know-what…odd, surprising, curious, unexpected. A man in the grip of something that won’t let go and is about a lot more than tumescence. 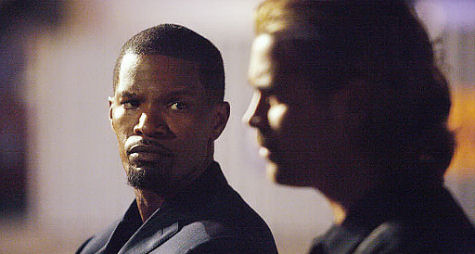 There’s a big heartbreak factor that comes out of the Farrell-Gong relationship at the finale, but let’s be honest and admit it’s not as emotionally touching as Tom Cruise‘s Vincent asking Jamie Foxx if anyone will notice his body sitting on an L.A. Blue Line train in Collateral, and it’s not as touching as Al Pacino holding the dying Robert De Niro‘s hand at the end of Heat. That’s one reason why this movie is an 8 on the Mann scale.

The sex scenes (Farrell/Gong’s in particular) have deep-down currents of feeling and longing that other directors wish for before they’re about to shoot their own. Dear God, let me find something between my actors that will make the audience forget the carnality, or at least put it into some kind of spiritual perspective.

All Mann movies are beautifully acted, and each and every supporting Vice actor, no surprise, is a stand-out. The big bad guys (Tosar, John Ortiz) are fearsome. Ciarin Hinds is playing a dullard but it’s good to experience him nonetheless. Barry Shabaka Henley, the jazz-club owner who got shot in the forehead twice by Cruise in Collateral, is good as an upper-level Miami cop. John Hawkes, an anemic-looking actor with a scuzzy goatee and an aura of insufficiency, portrays a low-level criminal during the opening few minutes. Domenick Lombardozzi (Find Me Gulity, Entourage) is very fine as another cop.

But please, please see this film for Gong Li, if for no other reason than it will help you forget how poorly she was used as the wicked bitch in Memoirs of a Geisha. This is one of the sexiest and most soulful performances by an actress in any medium in a very long time. I couldn’t quite understand everything she said, to be perfectly honest (her accent is a problem), but ooh, mama, the stuff she exudes during her scenes with Farrell.

I don’t want to get into the story any more than I have. It’s a film about lying — selling them, discovering them and the heavy cost and the smell of them. 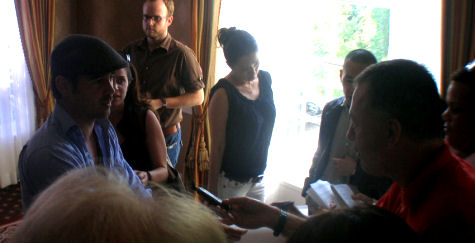 I’m going to let this go and see Vice again on Thursday and get into it a bit more on Friday, but no one can watch this film and feel burned. The people who’ve been whispering about this film not being the thing that it could have been haven’t seen it, not really. They haven’t let it in. Or they’re just being hard-assed.

Like I said, the highlight of the set-up, exposition, planning, and planting-the-seeds portion, which is something like 65% to 70%, is the romantic white-water ride taken by Farrell and Gong. I imagine there may be some who will feel a bit lost or uncertain in terms of what’s actually going down at this or that point. I did at times, but there’s something to be said every so often for the feeling of “not knowing.”