The reactions to Clint Eastwood‘s Jersey Boys started out with critics calling it very Clinty and a little less Broadway-flashy than it could be, but an interesting, respectable ride. Then everything started to go downhill. The critical word of mouth has been so mixed-dismissive (60% on Rotten Tomatoes, 54% on Metacritic) that I’ve been half-regarding tonight’s Los Angeles Film Festival screening as the final word-of-mouth nail in the coffin. And then along comes N.Y. Post critic Lou Lumenick calling it “one of the year’s best.” What?

My first reaction was “Okay, I get it…Lumenick is a tri-state area kind of guy — born in Queens, formerly a critic for NJ’s Bergen Record — and he’s basically saluting the Manhattan-New Jersey cultural aspects as much as the film.” Which makes me wonder if other critics with Soprano-land ties are going dippy also. I wonder what former New Jersey guy Glenn Kenny will say? I wonder what I’ll think, for that matter, as I grew up in a mellow little Wonderbread town called Westfield, which nonethless had its share of guineas who wore pegged pants and black pointed lace-ups with metal taps on the heels.

I remember those guys like it was yesterday. On my way home from school one day I was walking through Mindowaskin Park and four of them were sitting on a couple of park benches and chortling about some lame-ass shit. One of them spotted me and said, “Hey, you…are you a guinea?,” he said. “No,” I replied. “Then what good are ya?,” he said. The others were doubled over in laughter. Assholes.

Movie Nation‘s Roger Moore had this to say: “Whatever charms turned the musical Jersey Boys into a Tony winning Broadway hit are sorely missed in Clint Eastwood’s tone-deaf corpse of a movie. Late to the game, blandly cast and scripted with every Italian-American cliche in the ‘How to Make Spaghetti’ cookbook, it is Eastwood’s worst film as a director.” 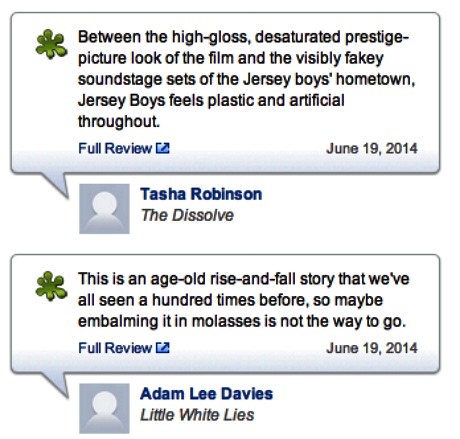