There’s a fascinating color illustration sitting above David Denby‘s review of Woody Allen‘s Magic in the Moonlight in the 7.28 edition of The New Yorker. It’s obviously an impressionistic drawing of the cast members (l. to r., Marcia Gay Harden, Simon McBurney, Colin Firth, Emma Stone, Jackie Weaver, Hamish Linklater), but it’s not so impressionistic that you can’t instantly recognize each actor. Not easy. The artist is Conor Langton, from Ireland. His page says he’s received awards from American Illustrator and Communication Arts, and that his clients include Rolling Stone. A few months ago he did a similar-type illustration for Wes Anderson‘s The Grand Budapest Hotel. 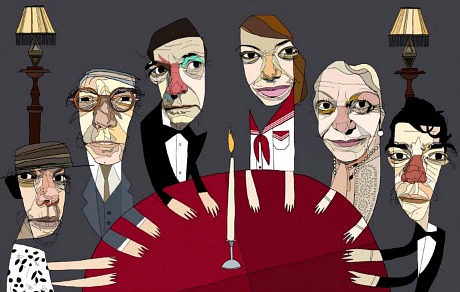 I don’t know about last-minute ComicCon 2014 schedulings, but the only surprise presentations that could seriously rock Hall H would be ones for Chris Nolan‘s Interstellar, Zack Snyder‘s Batman vs. Superman and J.J. Abrams‘ Star Wars: Episode VII. The only guaranteed hot ticket will be for George Miller‘s Mad Max: Fury Road. Can you imagine anyone actually cheering Lana and Andy Wachowski‘s Jupiter Ascending? “Whoo-hoo!…delayed until February!”

ComicCon 2014 will run from tomorrow through Sunday (7.24 thru 7.27). I for one am serenely uninterested in driving down to San Diego today. I’ll probably never attend that convention ever again, and for good reason. Last year at this time I wrote that ComicCon-ers “are the aesthetic locusts of our time…the dustbowl drought of the early 1930s visited upon cinema.” No less true today, and probably more so.

Anyway, with nothing new to say at this stage here are HE’s Greatest ComicCon Hits:

It’s still Dan Gilroy‘s Nightcrawler (Open Road, 10.17), still the same patiently-spoken, overly-controlled-sounding Jake Gyllenhaal looking for a crime-reporter gig (as I noted two days ago in a post called “Guy With Lit Fuse“). But this new trailer makes it seem more like a provocative life-in-the-big-city atmospheric thrill ride and less like a psychological profile.

I’m sorry but this feels a little gooey to me. A little too earnest and manipulative. Obviously The Lovely Bones by way of a coma rather than the Big Sleep. I loathe the idea of a songwriting, guitar-playing boyfriend serenading his sleeping (or comatose or whatever) girlfriend in a hospital room…hate it! And I hate the line “staring down the barrel of greatness.” The greatest achievers in the world never looked down that effing barrel — they just did what they were doing as best they could and with as few distractions as possible. Proclamations of greatness are for tribute dinners when you’re 78, or for obituaries.

You can sense discipline over, under, around and through this international trailer for Liv Ullman‘s Miss Julie, which will screen during the 2014 Toronto Film Festival. Discipline on Ullman’s part, but also, obviously, on the part of Jessica Chastain, Colin Farrell and Samantha Morton. Mikhail Krichman‘s cinematography is obviously quite handsome and Barry Lyndon-ish. (Krichman also shot Andrey Zvyagintsev‘s Leviathan.) Playwright August Strindberg, the author of the original 1906 play, had his issues with women. At least part of his prolific output is thought to be colored by misogyny. The above quote is from Woody Allen‘s Manhattan: “When it comes to relationships with women I’m the winner of the August Strindberg award.” I know that poor Morton suffered a stroke eight years ago and that it took her a while to recover, but why at age 37 is she turning into Tyne Daly?

In a sense Luc Besson‘s Lucy (Universal, 7.25) is a brighter, crazier, grabbier version of Under The Skin as it basically gives Scarlett Johansson another turn as a dangerous alien of sorts — a blank-faced lady with exceptional, unearthly powers who gives everyone and everything an odd, head-tilted look…pretty much the same routine (“Hmmm, what is this odd phenomenon? I need to study it more closely”) that Jeff Bridges used in John Carpenter‘s Starman. Towards the end she’s also playing, in a certain sense, the cyber-being she voice-acted in Spike Jonze‘s Her in that she eventually becomes strongly focused on the Great Spiritual Beyond. 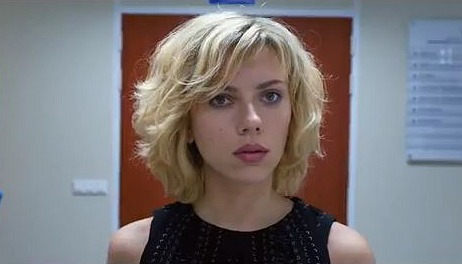 ScarJo starts out as an average, none-too-bright American, living for some reason in Taipei and terrified half to death when Taiwanese (or are they Korean?) gangsters nab her when she delivers an attache case on behalf of some greasy sleazebag she’s idiotically chosen to be a friend. They anesthetize her and surgically insert a bag some kind of blue-crystal stuff called CPH4 into her stomach. But when the bag inevitably breaks open (you were expecting otherwise?) ScarJo becomes a kind of T-1000 superwoman. The CPH4 has unlocked her brainpower and given her greater and greater physical abilities, almost Neo-like.

Once she’s broken away from (i.e., wasted) her Taiwanese captors she’s off to Paris, largely because Besson lives there but also because genetic scientist and scholarly backstory-explainer Morgan Freeman is based there. Then we’re in for some more hyper-drive action sequences and visually nutso (i.e., far-reaching) CG delirium.

Lucy’s T-1000 abilities (she can’t turn herself into gelatin or assume the appearance of others but otherwise she’s quite formidable) means she’s now an unstoppable killing machine as well as a growth-obsessed go-getter who needs to ingest more and more of the CPH4…forget it, doesn’t matter.

If any recent movie is CG-driven, Lucy is. Besson and his homies want to show us a lot of “ooh-wow” stuff, and so they put it into the script at every opportunity. I’m presuming they constructed a whammy chart while writing the script. It’s that kind of movie. It’s a movie that says “you can take a bathroom break whenever you like.”

On one hand Lucy is the kind of tediously frenetic CG action exercise that Quentin Tarantino or Eli Roth or any fan of super-hyper violence would fall for in a New York minute. But on the other hand it occasionally veers into trippy-ass visual realms that…well, at least they make the watching less arduous. And at least it’s relatively short (i.e, 88 minutes). You sit down with your popcorn and your lethargy and it’s like “oh, God, oh Jesus, here comes the same old bullshit” but then you start saying to yourself “but at least with a few trippy dipshit diversions along the way!”

Movies like this were made for the Drew McWeeny mature-fanboy mentality. (Quote: “I am in the tank for the way Besson tells stories…he’s got a knack for detail that wouldn’t occur to anyone else…he’s got a signature, one of the things that I love most about filmmakers, and I’ve missed it.”)

Joe Swanberg may be reluctant to acknowledge the word “alcoholic,” but he isn’t the least bit reluctant to cut Jake Kasdan‘s Sex Tape into ribbons. A filmmaker friend sent this along with the following: “Here’s something you don’t often see — a filmmaker taking the time to write an article shitting on somebody else’s film.”