The Alamo restoration campaign was idling this week. HE’s effort to gather more signatures of brand-name directors in support of Robert Harris‘s attempt to persuade MGM honchos to allow an independently-funded restoration of 65mm elements was…well, awaiting the next adrenaline shot. Darren Aronfosky, JJ Abrams, Guillermo del Toro, Alfonso Cuaron, Rian Johnson, Alejandro Gonzalez Inarritu, Bill Paxton, Bob Gale and Matt Reeves were still wearing Team Alamo T-shirts, so to speak, but others were thinking it over. And then something happened. I heard about an article being prepared about the Alamo situation for a major publication, and then a friend graciously suggested that I write MGM’s p.r. reps at Rubenstein Public Relations for a clarification of MGM’s position. 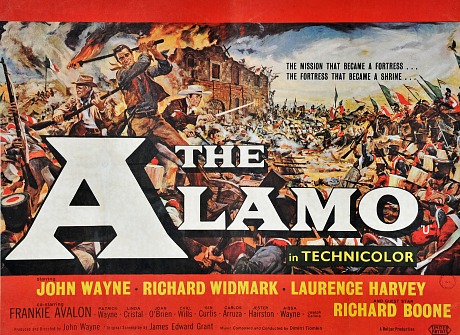 And then late Wednesday afternoon the Rubenstein guys passed along an official statement from Beverly Faucher, MGM’s VP of Asset Management and Delivery Services, and here’s what it said:

“We are proud to say that the original 65 mm theatrical elements of The Alamo are in fine condition and are not in need of restoration. We are currently restoring the additional 20 minutes found in the 70 mm ‘roadshow’ version of the film. Once this process is complete, all of the elements of the original content will be intact and there will not be a need for further restoration of the film at this time.”

I’m sorry, but as I was reading the above my eyeballs popped out of their sockets and went boiiinnnnggg!

I sent along Ms. Faucher’s statement to Harris, and he replied Wednesday night around 9 pm. For reasons best not explained I decided yesterday morning to hold this article for a day or so, but no longer. Here is Harris’s reply, chapter and verse:

“I have no idea where Ms. Faucher is getting her information, but beyond the oddly worded comment of ‘currently restoring the additional 20 minutes’, which I can’t comment upon, not one of her statements rings true.

“Let’s take her missive one point at a time.

“The 65mm theatrical elements of The Alamo are some of the worst mid-20th century film elements that I’ve ever had the unfortunate displeasure to examine. This is not opinion. It is fact. And obvious to any archival professional.

“If she is currently restoring the film to the original ‘roadshow’ version of the film, she is going to find herself short if she is restoring 20 minutes. The original 65mm roadshow version of John Wayne‘s 1960 film, which ran approximately 192 minutes **, was cut by approximately 2,916 feet plus 11 frames. That equates of a running time of approximately 32 minutes, 25 seconds. This would mathematically leave us with a general release print of 159 minutes and 35 seconds, but a myriad of changes (dissolves, recuts, extra shots) put into the general-release version resulted in a running time of 161 minutes. The final difference, therefore, is 31 minutes.

“But that’s just a running-time issue. Here is the plain, unfettered truth about The Alamo elements: 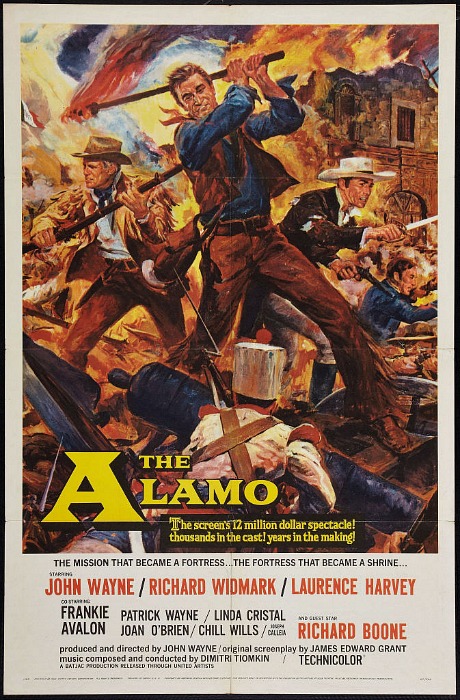 “The original 65mm camera negative was cut from the 192-minute ‘roadshow’ version ** to the 161-minute general release version, and all trims and deletions were junked, presumably along with original magnetic track stems and trims.

“The only remaining example of the ‘roadshow’ is a long-faded 70mm print, which was in superb condition when discovered in Toronto in 1992, but then, after being moved to Los Angeles, was taken from its cold storage resting place, and rejuvenated and mishandled toward the production of home video elements.

“I re-located the Toronto print in 2001 and had MGM move it to cold storage, but the majority of damage had already been done, as it had been stored as a miscellaneous print, after MGM’s mishandling.

“I inspected the original camera negative of of The Alamo a couple of months ago. The negative is heavily faded in its yellow dye layer down about 70%, with additional fade in the magenta dye layer.

“When the negative was originally cut and conformed in 1960 at Technicolor, it was cut using black leader that had not been properly washed, and was not chemically inert. The result of this mistake was chemical damage at the head and tail of every shot, appearing as color fluctuations. That damage cuts through the yellow dye layer heavily, and continues in moderation into the magenta dye layer. It is not removable.

“Additional damage is seen, especially in motion, as a differential fade that moves in and out from both sides of the film, probably entering the image 10% to 15% on each side. It appears to have come from odd oxidation of the stock over the decades, most probably from poor storage in the decades between leaving Technicolor and making its way to its current storage facility. Or possibly due to heat damage.

“As the problems are many, there is no way to simply drop the missing footage back into the general release version of the film, as that version is no longer printable to strike anything near a sufficiently quality-level image.

“The only element that MGM may have with anything close to decent color remaining would be a 35mm reduction element, which is unsuitable for any kind of restorative consideration, as the resolution of any such element would yield about 25% of the 65mm elements, if they were printable. The 35mm element would also be in the incorrect aspect ratio (i.e., 2.35:1 vs. the 65mm a.r. of 2.21:1).

“The black & white separation masters have also been cut to the general release version of the film, and have unfortunately been produced slightly out of focus, yielding an image that is not up to large format standards. Tests of recombines have not yielded true large format results.

“While I’m presuming that Ms. Faucher (or someone else at MGM) has personally examined all of the elements in question and has come away with her appraisal of the situation, it does not mesh in any way with mine.

“I invite her to examine the elements with me, and to view my tests. If her appraisal is still that the elements are in ‘fine condition,’ God help the rest of the MGM library.

“Lastly, the final verbiage in her statement may be the most frightening, to wit: ‘There will not be a need for further restoration of the film at this time.’

“What she is saying is that she and MGM are going to allow the film to die on their watch. Will MGM permit a process that will lead to The Alamo‘s restoration? Doubtful, as they don’t feel there’s a problem.”

** Wikipedia and other sources have reported that the 1992 Toronto roadshow print of The Alamo ran 202 minutes, not 192 minutes. This discrepancy is due to Dimitri Tiomkin‘s overture, entr’acte and exit music, which were attached to the roadshow version. The overture is 280 feet exactly, which translates to 3.1 minutes as film runs at 90 feet per minute. The Alamo‘s entr’acte music (i.e., played just before Part Two begins) runs 344 feet plus two frames or 3.8 minutes. The exit music runs 300 feet plus one frame, or 3.33 minutes. Grand music total: 10.2 minutes. 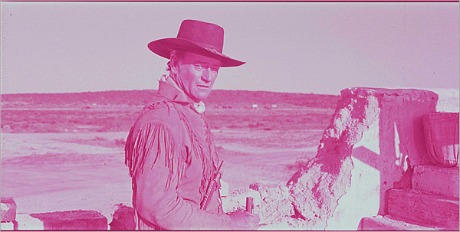