From HE pally Bill McCuddy: “Speaking of movies that will break up couples nationwide or at least have them chatting afterwards, one of the best movies of the year is The One I Love with Elizabeth Moss and Mark Duplass. Have you seen it? Completely original and a better version of something Woody Allen might have done. The cast is perfect. Peggy looks a lot better in 2014 than she does in the ’60s, I can tell you. 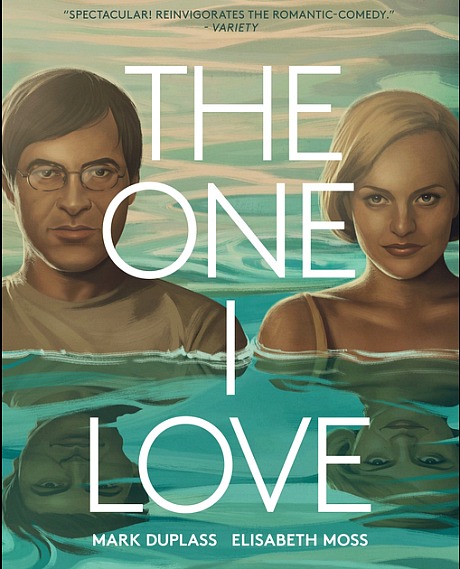 “Every romcom star in Hollywood is going to call their agent and say ‘get me a script like this!’ Except for one thing that happens late in the second act it’s absolutely perfect.

“It’s coming to VOD next week and we’re reviewing it on Talking Pictures On Demand for Time Warner subscribers.” (Except Talking Pictures on Demand refuses to provide embed codes for guys like me to occasionally post….brilliant!)

Wells to McCuddy: Yup — here’s my Sundance review and a more recent post. Very high on this except for the ending.

“What attracted me to the movie was the relationship aspects of it,” Moss told Mark Olsen during a Sundance q & a. “The concept behind the quote-unquote twist is the idea of who you present in a relationship, how you project one person in the beginning and then kind of shift to something else, maybe more who you really are.”

“I’ll say this much: Moss and Duplass play Ethan and Sophie, a couple who visit a kind of therapeutic country retreat in an effort to heal their damaged relationship (largely due to a brief episode of infidelity on Ethan’s part). Early on something happens that either (a) re-acquaints the couple with alternate, fantasy-projection, somewhat more attractive versions of themselves or (b) reminds them of the people they presented themselves as when they first met.

“I was really enjoying the metaphor that the film fiddles around with for the first 45 or 50 minutes of its 91-minute length. But I have to say that I wasn’t with it as much during the final 30. In my humble opinion the Rod Serling mirror action becomes too literal, but it didn’t throw me too badly. There are at least two problems (one minor, one huge) contained in the last 30 minutes that nag as you leave the theatre. But the metaphor is solid and true, and the first 45 or 50 minutes are worth it despite the head-scratching, not-quite-satisfying finale.”