Three days ago In Contention‘s Kris Tapley threw a few derisive swipes in my direction on Twitter. My offense was having written that the 2014 Venice Film Festival selections seemed “interesting and well-chosen as far as they go, but where are the sexy, award-season attractions? Or at least a surprise or two that no one saw coming? You need a little pop-pop-fizz-fizz with your kale salad and steamed carrots or the troops will get bored.” Here are the three Tapley tweets that took issue with this plus a little clarification from yours truly: 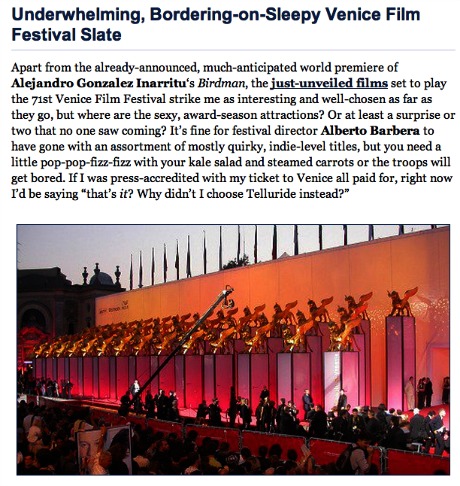 Tapley Tweet #1: “Not everything is a glitzy fucking gala with a hot-ticket after-party for you to go and be a sycophant. There’s a whole world out there.” Wells reply: “Kris can unzip his tuxedo slacks and piss-spray all he wants, but apart from the choice of Alejandro Gonzalez Inarritu‘s Birdman as the opener and perhaps Ramin Bahrani’s 99 Homes, the 2014 Venice selections seem to exude a certain kind of engaging, presumably intelligent but probably-not-world-class quality — distinctive, nicely done, mildly intriguing, possibly second-tier-ish. Kris knows that and still he calls me — me! — a red-carpet sycophant type. He knows as well as I do what kind of aromas that the two Al Pacino films (David Gordon Green‘s Manglehorn and Barry Levinson‘s The Humbling) are putting out. Tapley has just as good of an idea or gut instinct as I do about Peter Bogdanovich’s She’s Funny That Way, Michael Almereyda‘s Cymbeline, Andrew Nicoll‘s Good Kill, Abel Ferrara‘s Pasolini, etc. Venice is the kickoff of ‘the game’ and Kris knows that. He knows that Venice has premiered many, many ‘game’ films before, and he knows that the qualities that tend to get films into the game in the first place often tend to translate more often than not into riveting, first-rate or at least highly noteworthy cinema.”

Tapley Tweet #2: “I’ve seen some people cover the awards season and have whatever passion they had for cinema borderline extinguished. Sad but true.” Wells reply: “This is Tapley talking about himself, of course. He’s written and been quoted time and again that he finds the huckterism of the season to be spirit-killing or passion-draining. I love the rough-and-tumble of the season for the most part (although I do tend to run out of gas by the time Sundance rolls around). I know that the hype machines will never diminish my love of what’s really and truly levitational, and that every year there are always at least 8 or 10 films that qualify.”

Tapley Tweet #3: “If you look at a line-up of great world cinema and all you can muster is ‘Where are the sexy award-season titles?’, quit your job.” Wells reply: “Again, Kris has a pretty good nose for this stuff, and there’s no way he really believes that most of the Venice roster (i.e., apart from the Inarritu and the Bahrani) is going to measure up to his or anyone else’s definition of ‘great world cinema.’ I will be as delighted as the next fellow if one of those outliers turns out be the cat’s meow, but Kris knows the score as well as I do. The difference between Kris and myself is that most of the time I tend to lay my cards flat bang on the table while Kris…well, he’s no glad-hander but he’ll sometimes get out the tap shoes as he’s writing about something sensitive. He tends to use a bit more gentle sauce and throw in an occasional consideration for the political.” 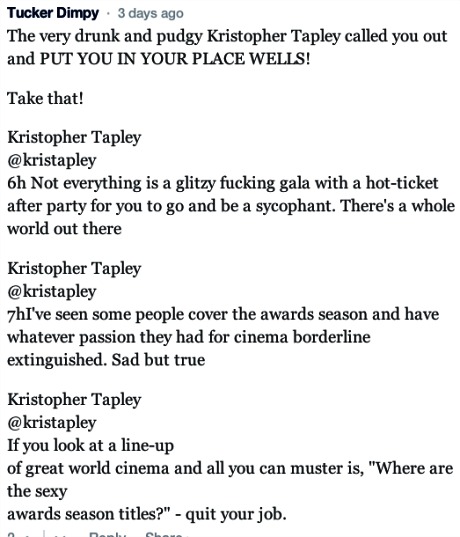