For its depiction of musical sequences as neurotic fantasies occuring in the mind of a tragic heroine (Bjork) who can’t cope with reality, and for its use of dozens upon dozens of stationary video cameras to cover the dancing and singing, Lars von Trier‘s Dancer in the Dark is one of the few groundbreaking musicals in cinematic history. (A new Bluray version is out this month.) The other biggies are (b) Gene Kelly and Stanley Donen‘s On The Town, the first musical shot in real-world locations, (c) Richard Lester‘s A Hard Day’s Night, the first semi-comical, nouvelle vague-styled rock musical featuring the first-ever MTV music video sequence; and (c) Bob Fosse‘s Cabaret, in which all song-and-dance numbers were performed on a club stage with nobody “breaking out in song” within the narrative. 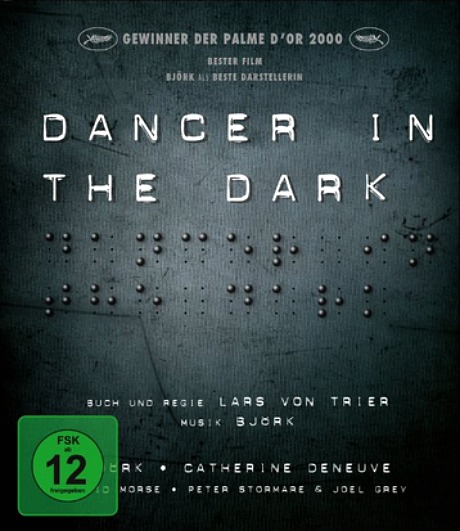 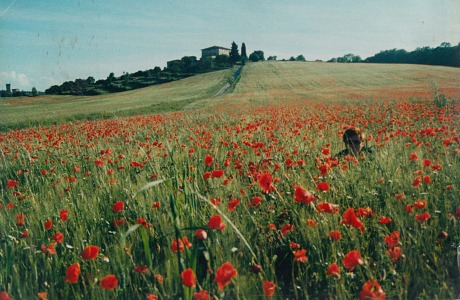 Dozens of acres of tall grass and red flowers on some grand estate somewhere south of Siena, Italy. Taken in late May of 2000. I was detoxing from the Cannes Film Festival, which had screened Lars von Trier’s Dancer in the Dark a week earlier to great fanfare.
(More…)
August 17, 2014 4:10 pmby Jeffrey Wells
21 Comments
We’re Dead

Sylvester Stallone‘s Expendables franchise is all but toast. Domestically for sure. The Expendables 3 flopped this weekend with a lousy $16.2 million haul, or about $10 million shy of expectations. All three Expendables films have been B-movie “product,” made with a smug and cynical attitude. “Yo! We’re just farting around here and the public is in on the joke so fuck it, y’know?…we’re all getting well paid and the chumps are lining up so why fuck with the formula?” The Expendables (’10) cost $80 million to make and it earned $241 million worldwide with a Rotten Tomatoes rating of 41%. The Expendables 2 (’12) cost $100 million to produce with a worldwide gross of $311 million and a 65% Rotten Tomatoes score…getting good at this! The Expendables 3 cost $90 million but was heavily pirated (over 5 million downloads) and the word must have gotten around that it’s a piece of shit. It takes the public years to catch on. With very few exceptions (Rocky, First Blood, Copland) Stallone has doggedly starred in or directed mediocre films. That’s what he does. He’s in it for the money and the fine cigars. He had a major-league franchise that had a potential to be something more but he blew it. What’s he gonna do, create another popular franchise? He’s done.

In this third-act scene from Howard Hawks‘ His Girl Friday (’40), Cary Grant dismisses a prediction of career doom by saying “listen, the last person who said that to me was Archie Leach a week before he cut his throat.” Grant was referring to himself, of course. In a first-act scene in Warren Beatty and Buck Henry‘s Heaven Can Wait (’78), Dyan Cannon told Charles Grodin that she should be “canonized” for conspiring to kill her vile multi-millionaire husband, Leo Farnsworth. Name other films and scenes in which actors briefly stepped out of the film by mentioning their off-screen selves or reputations — anything along those lines.

For whatever reason…exhaustion?…my body decided to ignore all of the usual summonings this morning (including the kitten lying on my head and licking my ear) and sleep until almost 11 am. After crashing around 1:30 am. Nine hours and change. My normal routine is to bag maybe six hours plus an hour of Twitter before rising. It sure feels good to get more sleep than I need on occasion (my usual idea of a nice long slumber is seven to eight hours), but I’ve always fought against going to bed before midnight. I sometimes take hour-long naps around 4 or 5 pm, except they aren’t naps. When I go under I sink to the bottom of the pond. A lot of people sleep in the manner of dogs or cats — they float on the surface and are woken by the slightest ripple. Not me.

I know, I know…I posted a sleeping riff 17 months ago but what the hell.

My inability to crash before midnight or 1 am is my parents’ fault. They sometimes made me go to bed at 8 or 8:30 pm when I was grade-school age. I remember being furious about lying under the sheets when it was still light out during the summer months, especially when I could hear friends of mine still playing in the street below. I used to lie there and seethe and ask God why I had such fucked-up parents. I resolved to stay up late from those days on. I never made my kids go to bed too early when they were six or seven or eight — I didn’t have them on very many school nights (my ex had custody) but when I did they always stayed up until at least nine or so. Weekends were free-for-alls. Sometimes it was a chore to get them to crash around midnight or 1 am, especially Dylan.