Almost A Retitling…But Not Quite

Variety‘s Marc Graser is reporting that the Edge of Tomorrow Bluray (Warner Home Video, 10.7) has almost been retitled LIVE DIE REPEAT, which of course was the marketing slogan when the Doug Liman film opened last May/June. The Tom Cruise sci-fi actioner underperformed so they’re trying something new. But the old title is still hanging on. The title on the binder side actually says LIVE DIE REPEAT / Edge of Tomorrow. If the WHV guys had any real cojones, they would have junked Edge altogether. Whadja expect? Guys who work for corporations always hedge their bets. 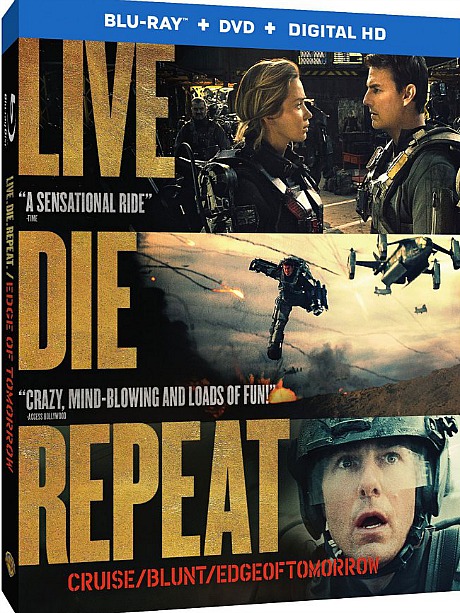 My 5.31.14 review, written in my Pqris sublet at 10 rue Felix Ziem: “Doug Liman‘s Edge of Tomorrow (Warner Bros., 6.6) is an A-level, full-throttle, brain-tease-y sci-fi thriller and (don’t take this the wrong way) a videogame movie of the highest order. I realize, obviously, that ‘videogame movie’ is a perjorative but this pleasure puppy knows how to smarten the material and make it seem…well, a bit deeper than it actually is. It’s basically about failing and learning, failing and learning, failing and learning a bit more. It’s Groundhog Day meets Starship Troopers meets Playstation 4. And it’s not overlong or draggy or anything but super-efficient. It’s over before you know it.”