Last Thursday TheWrap‘s Steve Pond asked if Richard Linklater‘s Boyhood, which has been celebrated industry-wide as novel and striking and even masterpiece-y (and earnestly praised on this site), can leapfrog the Spirit Awards moat and become a Best Picture nominee at the Oscars. I think it can and most likely will be nominated, as long as the Oscar-blogging mafia (less than 15 people when you boil it down) keeps pushing it as Best Picture-worthy over the next five and a half months. 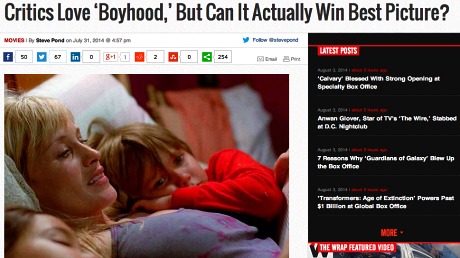 Pond even went so far as to say “it could actually win.” Because, if I’m following the thinking, no other film (a) took twelve years to make and (b) follows a family of characters as they age and trudge through their dramas and find their paths and survive with their spirits not only intact but in some cases afloat. A win is certainly possible — not likely but certainly possible — because Boyhood does seem to be the one film that has that all-encompassing, life-embracing sprawl or theme that the other presumed hotties seem to lack in this or that way. It seems to have the biggest heart, at least from the vantage point that we’re all currently sharing.

“If enough of the major [critics] groups come out for Boyhood, it’ll essentially force Academy members to come to terms with it,” Pond writes.

What’s really interesting is that Pond seems to be saying without actually “saying” that he doesn’t see any Oscar-worthy themes among almost all of the other “usual suspects” as we speak. The only competitors he’s eyeballing are Alejandro Gonzalez Inarritu‘s Birdman and Paul Thomas Anderson‘s Inherent Vice. But the word is already out that the latter might be too PTA-quirky to be Academy-friendly (which sounds like my kind of film and then some!) so it’s really Birdman vs. Boyhood. And it’s only August, for God’s sake. And Grantland‘s Mark Harris probably won’t even write about this until early October. Okay, possibly by late September.

What is Pond thinking about the others? Let’s imagine. Interstellar might be seen as too emotionally squishy and manipulative, too McConaughey-laquered. A Very Violent Year might be too New York crime-y and Sidney Lumet-ish. Selma might be too something-or-other but I know that important historical subject matter alone isn’t enough. The Imitation Game might be seen as a little too World War II-ish and code-breaky and lamenting about its hero’s sad fate. Exodus: Gods and Kings might be too too Bible revisionist, too weird, too “Ridley Scott on the downslope”-y. Unbroken might be regarded down the road as too proud and/or chest-beating about its hero’s prolonged suffering. Wild might turn out to be just a good hiking drama. Theory of Everything might be too academic or scientific or lacking in sweep. What else?

Would you like to know what the best film of the year is so far? Above and beyond Boyhood, which I admire as much as anyone else? Trust me and no lie, it’s Andrey Zvyagintsev‘s Leviathan. And I’ll tell you something else: Sony Pictures Classics will have no choice but to push Leviathan as a Best Picture contender if Russia, as expected, blows it off as its official Best Foreign Language Feature Oscar submission. This brilliant melodrama easily deserves a Best Picture nomination for its chops alone, but a Best Picture nom would also be a way for Hollywood to send a message to Vladmir Putin and the brutish, gangster-like climate he’s created or has come to represent in Russia (which is precisely what Leviathan is about) and also to express a stiff salute to the victims of the recent downing of MH17 in East Ukraine.