I lasted about 45 minutes with Robert Rodriguez and Frank Miller‘s Sin City: A Dame to Kill For (Dimension, 8.22). Not to sound pervy but I waited for Eva Green‘s nude scenes. Honestly? They were pretty damn good. That’s what this film is selling, right? Hard-boiled hard-ons. The first Sin City (’05) was a simple-dick noir cartoon crammed with gruff machismo and brazenly sexual temptresses. Sin City: A Dame to Kill For is a parody of a parody of a simple-dick noir cartoon, etc. Rodriguez always gets his actresses to parade around in skimpy lingerie and Miller…well, his comic book series started it all. I was dead bored five minutes in, but I was determined to wait for Green. I’m sorry but that’s what happened. 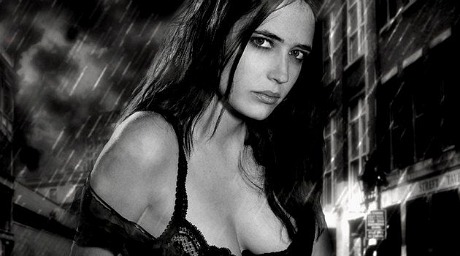 Eva Green in Sin City: A Dame to Kill For.

In the view of Variety‘s Justin Chang, Sin City: A Dame to Kill For “clocks in 23 minutes shorter than its predecessor yet [it] feels far more enervating. This is a movie that, in attempting to update the tawdry pleasures of classic American crime fiction, doesn’t hesitate to indulge its characters’ peeping-tom fantasies as well as ours. In scene after scene, voyeurism is less a subtext than a narrative constant, whether it’s a kinky tryst being secretly photographed from above, a woman diving naked into a moonlit swimming pool, or a squad of vigilante vixens roaming the streets with crossbows while modeling the latest in designer dominatrix wear.

“It may be in 3D this time around, but [this] monotone, monochrome comicbook universe feels flatter than ever. Rare indeed is the movie that features this many bared breasts, pummeled crotches and severed noggins and still leaves you checking your watch every 10 minutes.”

Favorite sentence: “From there the movie quickly devolves into window-smashing, eyeball-gouging mayhem, every blow landing with a Dolby-fied crunch, and often accompanied by a burst of white blood that look more like a bird-turd explosion.”