Either Your Brains Or Your Signature

Chris “right on the edge of thin although I’m sure he’s planning to get fat again” Pratt is on the cover of the new Esquire, which I bought last night. I didn’t start flipping through it until 10:45 or 11 pm, at which point I was starting to fade. At the same time I was talking to a lady on the phone and playing with the kitten. All to explain that I had to read this pull quote three times before I got it. At first I thought Pratt had bought a gun for his wife, Anna Faris, with instructions for her to blow their brains out — his and her own — in case an intruder breaks into their home. (“Crazy person” is singular, “their” is obviously plural.) I read it again — Chris Pratt wants Anna Faris to shoot him in the head and then kill herself if an intruder breaks in? If he’s referring to “their” brains being blown out he can’t be referring to a single “crazy person”, right? So he must be talking about leaving the world together as man and wife. Then I realized, “Of course! The under-educated Pratt got his articles wrong and Esquire didn’t want to fix the quote (i.e., change it to ‘his’ brains) for fear of being labelled sexist. After all the intruder could be a woman.” This is the world in which we live. 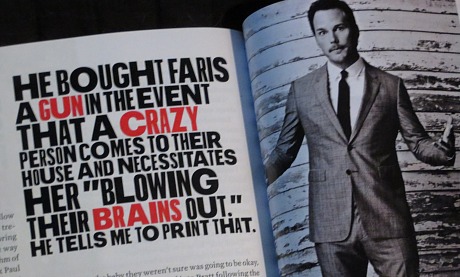