Guardians in Burbank Around 10 pm

Last night at 6 pm I caught a junket screening of Phillip Noyce‘s The Giver, and then I saw about 40% of Robert Rodriguez and Frank Miller‘s jazzy but dreadful Sin City: A Dame To Kill For. I was glad, however, for the shadowed but but abundant nudity that Eva Green agreed to do for the latter film. This is good, I told myself. I’m glad I’m watching this. Uh-oh, wait…now I’m in even more trouble with Melissa Silverstein! Is it sexist to say “yes, it’s pleasing to look at a beautiful naked woman”? Possibly but if there’s a real sexist in the room it’s Rodriguez, whose female characters are almost always portrayed as sexually tantalizing, emotionally vulnerable but often treacherous vamps. Plus he always gets his female performers to wear skimpy underwear or stripper outfits or do a topless scene, or a combination of all three. The man is clearly uninterested in other aspects of the female condition, and don’t even get me started on Miller, the Godfather architect of this creaky, anachronistic, sexist-dog realm. 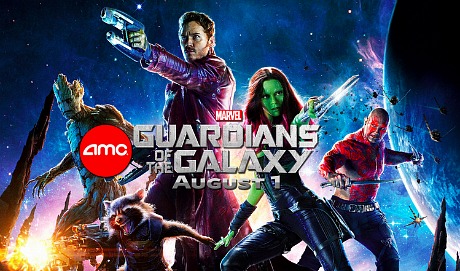 Anyway, before Sin City began I was speaking to Collider‘s Steve Weintraub (a.k.a. “Frosty”) and I was talking about really needing to catch Guardians of the Galaxy except I was fearful of the crowds because it’s expected to nudge $100 million by Sunday night, etc. The answer is simple, said Weintraub– the AMC 16 in Burbank. Because it doesn’t accept seat reservations and so it’s anybody’s game if you get there early enough, and because it’s apparently been upgraded in terms of projection and sound, and because no less a personage than James Cameron once told Weintraub that the AMC Burbank 16 is the only way to go, and that this is “not even a debate.” So I walked out of Sin City and hopped on the bike and managed to get into a 3D showing that began at 9:50 pm.

Guardians is the same old commercial space-fantasy crap on one level, but it really, really entertains when it steps off the traditional genre treadmill, which is quote often. The only bad parts are those involving that awful fucking Ronan, the big hammy villain with the flamboyant and termite-ants-eating-a-Kiss-face makeup.

Some of Guardians is quite delightful. James Gunn‘s ’70s mix-tape idea was inspired. The opening musical dance number (i.e., Chris Pratt bopping to the sounds of Redbone’s “Come and Get Your Love”) is pure ecstasy. It’s obvious why Guardians — a hip, cleverly amusing, loose-shoe comic riff on classic CG spaceball adventures — has been so well reviewed and is making historic coin this weekend. It’s far from a great film but it hits all the right buttons and it benefits from a lot of hip argumentative dialogue along with that oldies sound track. I never quite levitated out of my seat but some of it — okay, a lot of it — is a huge kick in the pants.

If there’s anything wrong with Guardians of the Galaxy, it’s that it isn’t crazy enough. It still sticks to the basic Marvel template and that hapless hero scheme that are part of many Marvel movies (“We’re losers, guys, but if we pull together we can be winners!) with that awful Ronan villain straight out of central heroin-overdose casting — the movie is a complete drag when he’s on-screen. At times Guardians almost feels like Masters of the Universe, that late ’80s Cannon cheesball space epic. It could have possibly been that awful film in the wrong hands, but Gunn and Pratt and the snappy dialogue save it and then some.

Imagine if Gunn had really cut loose and just made this film about crazy loopy shit all the way. What if he’d turned it into a story of a space garage band composed of impudent, immature misfits who zoom around the galaxy playing gigs and doing drugs and fending off pirates and…well, like that? To hell with all of that routine, cookie-cutter, superheroes-vs.-supervillains crap with stupid-ass Rodan and the other scowling, pusturing bad guys. The worst moment in the film is when Ronan suddenly turns up again at the very end, after you thought he was dead. Oh, no…him again! Asshole!

But the music and the above-average FX and the snippy dialogue and Chris Pratt bring it home. Not to mention Bradley Cooper‘s voicing of the pissed-off raccoon.

Pratt is fascinating. A really likable and good-looking guy who’s right on the edge of fat in this film — he’s really quite overfed. And yet he used to be much fatter. I was accustomed to the way he looked in Moneyball when he was relatively trim, and then he turns up in Guardians maybe, what, 25 or 30 pounds heavier? After losing 60 pounds beforehand? Pratt is very winning and personable is a charmingly brawny and open-eyed sense (i.,e, “Han Solo plus Marty McFly”), but he’d better watch it if he wants to be a big movie star.