Pay Us To Gently Smother Your Film

Seeing and half-liking Are You Here made me want to do a little Owen Wilson phoner. Just to congratulate him for delivering a slightly deeper, sadder and more grounded version of that guy he’s been playing since Bottle Rocket, etc. I conveyed my initial enthusiasm to Wes Anderson, Owen’s old pal and longtime colleague, and he told me he’d forward my email. But I was stopped in my tracks by an apparent decision by the principals to wash their hands of of Are You Here, promotionally-speaking. Presumably because it’s been regarded as toxic since it was screened and killed in Toronto last year. Millenium Entertainment’s basic plan seems to be “screen it but don’t promote it…the radioactive buzzkill will be even worse if we don’t screen it at all so the best thing is to screen it as quietly as possible…don’t overtly strangle it but starve it with neglect.” 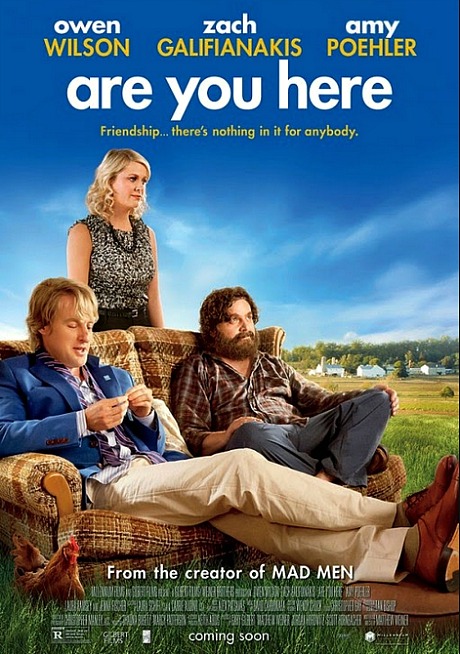 The task of conveying this decision fell upon the shoulders of a certain publicist at MPRM. “Of course we’re not dumping it, Jeffrey,” he said, “but we have to ask the distributor if talent is available,” etc.

My favorite part came when the MPRM guy explained that “both Owen and Zach are shooting a film in North Carolina” — Jared Hess‘s Loomis Fargo — “so their schedules unfortunately don’t allow them to travel for press. Trust me, we would love to have them available.”

Aww, darn! I was hoping that the Loomis Fargo producers would say to Wilson and Galifianakis, “Guys, we have a movie to shoot but on the other hand MPRM needs you to do interviews to promote a misfire that almost everyone except Jeffrey Wells dislikes so the obvious path of action is for you to get on a plane and fly to Los Angeles and New York do in-person interviews. We know that phoners are out of the question, of course, so go for it, hombres! Don’t worry — we’ll halt production and eat the costs until you get back.”

All I can say is that I tried. But the end result was that MPRM felt I was being a pain in the ass for trying to be a genuine friend of this film as far as I was able to be friendly, and for wanting to say I’m an admirer of what Weiner tried to do. No contacts for me to pursue independently. No help whatsoever. In short, they’ve been paid to suppress any in-depth interest in Are You Here, and I must say they’re doing an excellent job at that.