What’s wrong with a 78 year-old ex-movie star running a South Florida arts institute and teaching acting? Nothing. It’s better to teach in the here-and-now than to sit around on a sundeck and say “I used to be big.” Or “I am big — it’s the pictures that got small.” In a piece called “Professor Burt,” Grantland‘s Gaspar Gonzalez describes one of Reynolds’ classes at the Burt Reynolds Institute in Lake Park, Florida (just south of Jupiter, where Reynolds has lived for the last 30-something years), and…well, the particulars speak for themselves. 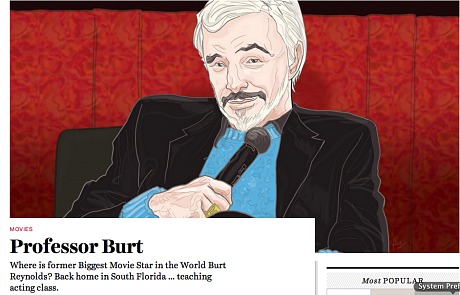 Reynolds knows a thing or two about acting, I’m sure, but I would pay serious money to listen to him talk honestly about how he fucked up his acting career by making one arrogant, bone-headed move after another after another, etc. Those fast-car movies. Blowing his post-Boogie Nights momentum. Getting bad plastic surgery, wearing those terrible rugs. Yes, Reynolds was arguably starting to be over by the early ’80s (and was all but totally over by the mid ’80s) because that moustachio’ed ’70s super-stud thing was coming to an end for its own reasons, and because he missed the subsequent action-stud wave that Schwarzenegger, Stallone and Willis made book on, but he did what he could to fuck things up on his own. The man has been his own worst enemy for…aahh, forget it.

Reynolds initiated his demise by making all those stupid shitkicker paycheck movies with the yokelish Hal Needham. Reynolds had a pretty good run at the top (’72 to ’83 or ’84), and then he was done. Reynolds-the-actor (as opposed to Reynolds-the-box-office-attraction) was great in Deliverance, half-good in Shamus, The Man Who Loved Cat Dancing, At Long Last Love, regrettable in Lucky Lady and Hustle, good in Semi-Tough, very good in Starting Over, good in Sharky’s Machine and Best Friends, decent in The Man Who Loved Women…and that was it until he played an older thief in Bill Forsyth‘s Breaking In (’89). And then nothing came of that. And then along came Paul Thomas Anderson‘s Boogie Nights (’97) and Reynolds called it shit and fired his agent, etc. The man was brilliant at shooting himself in the foot.