Two days ago Screencrush‘s Matt Singer summed up Five Rules for Success in Biopic Season. Five things, in other words, that actors have to do to get nominated for an acting Oscar. One, either gain or lose a ton of weight. Two, age onscreen and not so gracefully. Three, play someone who had great accomplishments but didn’t receive adequate credit (i.e., The Imitation Game). Four, fight against any kind of prejudice (i.e., Imitation Game, Selma). And five, if all else fails sing a song. It’s all listed, referenced and thoroughly explained.

The thrust, obviously, is that Academy voters, saddled with the psychology of abused and needy children, fall for the same routines over and over.

Now that Morten Tyldum and Graham Moore‘s The Imitation Game (Weinstein Co., 11.28) has finally opened, perhaps those who’ve seen it could answer a few questions? 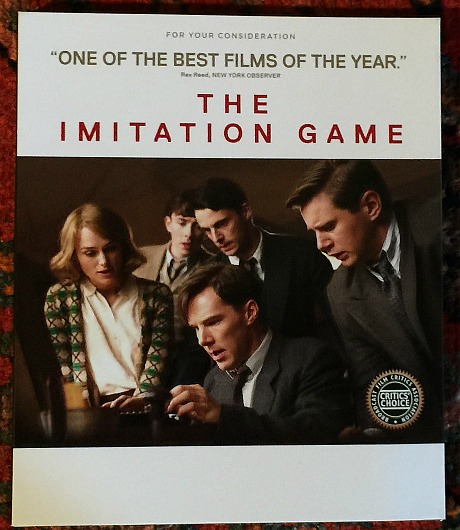 1. Does the film tell Alan Turing‘s story well and fully, and does it engage the viewer, etc.? Is it a sharp, well-ordered thing — a movie that knows what it’s doing and how to make it all cook and simmer just so, as I said in my original review — or could it use some other ingredient?

I’ve expanded my “pure as the driven snow” Best of 2014 list (originally posted on 11.20) to 27, having added Rob Marshall‘s Into The Woods, Hany Abu-Assad‘s Omar and Charlie McDowell‘s The One I Love to the second-tier 13-to-26 list. Adding Pawel Pawlikowski‘s Ida (which I’ve always regarded as a 2013 film although I understand that most see it as a 2014 release) and you’ve got 27. I’ll update once again after seeing Unbroken on Sunday night, 11.30, followed by Big Eyes and Exodus two or three days later. (I’m currently halfway through an online screener of Nuri Bilge Ceylan‘s Winter Sleep.)

When did everyone decide that Julianne Moore was all-but-locked to win the Best Actress Oscar? Roughly two and half months ago, or just after Still Alice, a morose but affecting Lifetime movie about a brilliant college professor suffering from the progressive malice of Alzheimer’s disease, was picked up by Sony Classics out of Toronto on 9.12. But of all the reasons that Moore deserves her big win (and I’m not arguing this in the least — she’ll almost certainly have her Oscar moment on 2.22.15), Still Alice, which I finally saw yesterday, is the least of them.

Moore plays her sad part with delicacy and the depth of feeling that only great actresses seem to fully harness — she’s convincing and then some. But for me, Still Alice is a hellish thing to sit through. It’s a dirge about a kind of death sentence or more precisely a spiritual suffocation, mitigated to some extent by the fact that the condemned (i.e., Moore) is attractive and wealthy and married to a nice man (Alec Baldwin) and surrounded by bright, sensitive family members who care a great deal and can do absolutely nothing to help.

Still Alice is a movie that says “okay, your brain is going to start dying now…okay, the symptoms are getting a little worse now…is the horror of this predicament affecting everyone? Getting worse, still worse…my God, this disease really sucks! And Julianne Moore can’t do anything about it. And neither can you, the viewer. Because we, the filmmakers, have decided that the most sensitive and affecting thing to do is for everyone — Moore, the costars, the audience, Jeffrey Wells sitting on his living room couch — to just ride it out to the end…sadly, gently, compassionately.”

I’ve been waiting for a long, long time to see those mountains of water, rolling and cresting in the big red-sea sequence. In this respect and in terms of general visual panache, Ridley Scott has finally elbowed aside Cecil B. DeMille. The first press screenings of Ridley Scott‘s Exodus: Gods and Kings (or at least the ones I know about) will happen on Wednesday, 12.3. Pic opens nine days later.

A North Korean government-controlled website, Uriminzokkiri, has laid into The Interview, the satiric political comedy opening on 12.25, and, by inference, its star and co-director Seth Rogen, co-director Evan Goldberg and costar James Franco. In the usual blustery, militant tone of official North Korean pronouncements, the statement declared that the filmmakers “must be subject to stern punishment.” Which could mean bare-bottom spanking or something heavier. 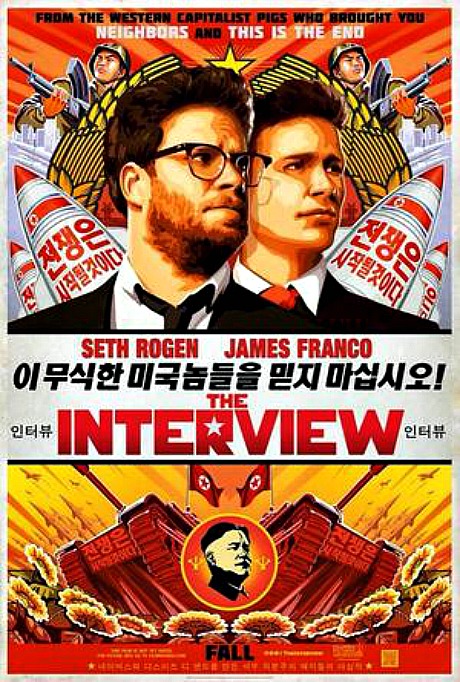 “The cheekiness to show this conspiracy movie, which is comprised of utter distortions of the truth and absurd imaginations, is an evil act of provocation against our highly dignified republic and an insult against our righteous people,” the statement said.