I’ve always loved this old SCTV skit about longtime Bob Hope worshipper Woody Allen attempting to collaborate with his idol. Until today I never knew that the phrase “aging Pentagon clown,” a Hope description that I first heard back in the early ’70s, came from a Russian journalist. Ten or twelve years ago Albert Brooks delivered an entertaining speech to some industry gathering of some kind (I seem to recall it occuring in Santa Monica) and I somehow got hold of an audio tape of Brooks’ remarks, and I transcribed a portion of them. And one of the stand-out portions, for me, was when he talked about watching Bob Hope on TV as a kid in the 1950s, and how his father would get really excited when an upcoming Hope appearance loomed, but when Hope did his act “you never laughed,” Brooks recalled. I posted a transcript of Brooks remarks about Hope and the absence of seatbelts in 1950s cars, and a couple of days later Howard Stern read from the Hope stuff on his show. (This was at least a couple of years before he started with SiriusXM.) Note to Brooks if he’s reading this: Any chance you have a recording of this speech lying around, and could I persuade you to share it? 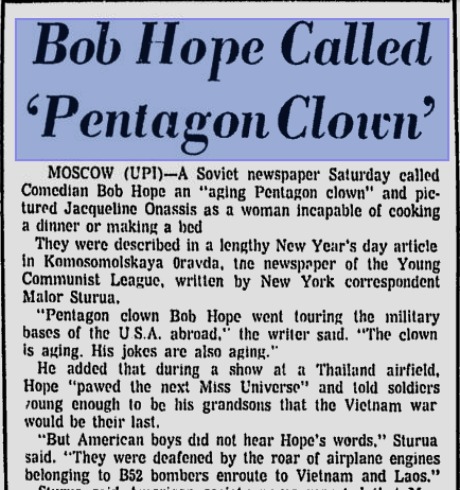