Made In The Shade

I’ve come to a semi-profound realization about Los Angeles, one connected to my longstanding irritation with this bleached-out burg, and, correspondingly, why so many people say they love it when the nighttime energy manifests but are always inside during work hours. And it’s fairly basic. For there to be occasional serenity in anyone’s life outside their doors and dreams and meditations, there has to be some approximation of that easy feeling that comes from natural tree cover and respite from the sun’s glare. I never met a leaf I didn’t like, but Los Angeles has never been much for that. 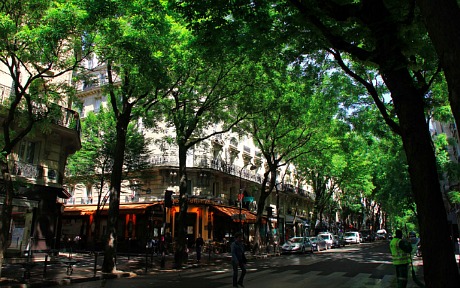 My favorite cafe along rue Caulaincourt in Montmartre, obviously during the summer months.

Okay, you can obviously get some shade therapy here, but there’s little to be had outside of Beverly Hills, Brentwood, Bel Air, Hancock Park and upper Santa Monica. You basically need to be loaded or to placate yourself with visits to Griffith Park or Franklin Canyon.

Except, of course, when the sun does down, which is when everyone’s attitude suddenly changes and L.A. becomes a certain pulsing, splendorous, heat-of-the-night thing, which anyone with any kind of appreciation for perverse, off-kilter beauty has been seeing for decades.

I’m thinking of the trees along Boulevard Arago in Paris at the southern end of the 5th arrondisement, outside of a place where I stayed in the summer of ’04, or along rue Caulaincourt in Montmartre during the late spring, summer and early fall — stately old friends, sprawling, wonderfully soothing. The trees in Connecticut’s Fairfield County number in the hundreds of millions, and each is a kind of treat. Some of the eucalyptus trees in Golden Gate Park are so titanic you feel you have to lie down before them and just stare.

Shade, leaves, limbs, leaders. Nature persistent and persevering. Squirrels and acorns. All of which I had in abundance when I was a kid in suburban New Jersey.

A general notion that most of the Middle East is treeless and shadeless and sandy and parched is the main reason I have no interest in visiting that region, above and beyond concerns about getting my head sliced off.

On the other hand I’ve always had a great affection for that “eight spindly trees” rant in Billy Wilder‘s Ace In The Hole, so go figure.

[This is an edited, augmented version of a piece I wrote and posted in August 2004. I read it for the first time in a decade via The Wayback Machine, a site I hadn’t known about until Sasha Stone pointed it out this morning.] 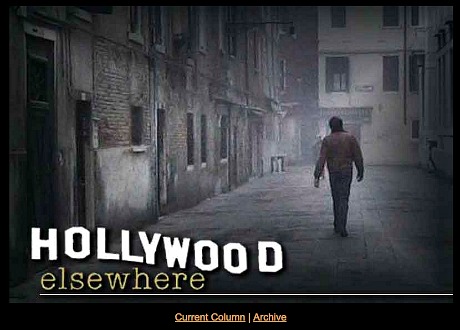