This morning I read Eric Kohn‘s Indiewire interview with Selma director Ava DuVernay and Fruitvale Station director-writer Ryan Coogler about their support of the Black Friday Blackout. For me, the stand-out portion is when Kohn asks DuVernay if she sees “any direct connections between today’s climate in the immediate aftermath of Ferguson in the story of Selma.” And Duvernay responds as follows: “Yes, absolutely. It’s the same story repeated. The same exact story. 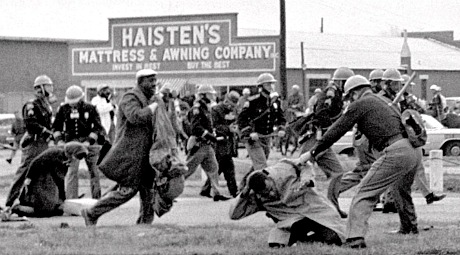 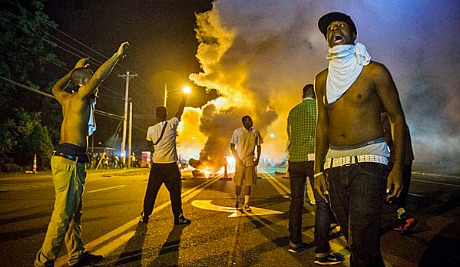 “An unarmed black citizen is ‎assaulted with unreasonable force and fatal gunfire by a non-black person who is sworn to serve and protect them. A small town that is already fractured by unequal representation in local government and law enforcement begins to crack under the pressure. People of color, the oppressed, take to the street to make their voices heard. The powers that be seek to extinguish those voices with brute, militarized force and disregard for constitutional rights. That’s Selma 1965. That’s Ferguson right now.”

This moved me to write the following to DuVernay a few minutes ago:

“Ava — Today I noted your statement in the Eric Kohn Indiewire interview in which you link the Selma marches & non-violent protests of 1965 with what has happened in Ferguson.

“In line with this, I want to bring to your attention (or perhaps clarify if you’ve already heard of it) a different linkage that I mentioned three nights ago. Regretfully, I would add, as it turned out all wrong…even if my heart was in the right place.

“Right after the Ferguson Grand Jury verdict was read, and just before a Disney-lot screening of Into The Woods, I tweeted that a possible ‘strike a match rather than curse the darkness’ response to this otherwise tragic event might be a surge of industry Best Picture support for Selma. Yes, I the wrong thing to say at the moment. But I meant that symbolically lighting a candle rather than lamenting the ugliness might be a good thing in the end.

“The Twitter community did not get my point. I was all but roasted alive for saying this. Many people tweeted that I sounded like an insensitive asshole, and I admitted soon after that they were mostly right — I definitely chose the wrong time to suggest there was (or might be) linkage between Ferguson and Selma.

“But at heart I had tweeted a positive sentiment. I was thinking, you see, of Martin Luther King’s words about how only love can eradicate hate. I was thinking that standing by a film about human dignity, compassion and human rights would serve as a kind of positive response to the Ferguson situation. I didn’t say it right and I’m sorry for writing this in a gauche way. But I was trying to suggest that in roundabout fashion that this would be a way of showing love and respect for the right things and the right people.

“Again, I honestly began with my thinking of MLK’s words, but my writing was clumsy and I hit the wrong piano keys. I apologized to everyone but there were still a few foam-at-the-mouth types who wanted me burned at the stake.

“Anyway, just wanted you to know this. — Jeffrey Wells, HE”