They Call Him Billy

Yesterday I spoke with veteran film editor William Goldenberg on behalf of his work on The Imitation Game, which is so smooth and fleet and seamless that I didn’t quite notice it. In this respect great editing is sometimes like great film music — the less it stands out the better it might be. And yet everyone noticed and admired Goldenberg’s cutting of Argo and Zero Dark Thirty, the result being that he was Oscar-nominated for both and thereby competed against himself. He won for Argo but if you ask me his work on Zero Dark Thirty was more mesmerizing or musical or whatever. (In that invisible sort of way.) Goldenberg’s cutting of Michael Mann‘s Heat (’95) and particularly the big bank-robbery scene in downtown Los Angeles is also the stuff of legend. He’s now cutting Concussion, a football injury drama with Will Smith that’s currently shooting. We talked about (a) the relationship between music and editing, (b) why certain editing jobs stand out as opposed to others, regardless of quality, (c) different styles of action editing and Walter Murch‘s rule about no more than 14 set-ups per minute, (d) why the poison-apple scene in The Imitation Game was left on the cutting room floor, and (e) the general aesthetic about cutting being generally a lot faster these days than it used to be. Again, the mp3. 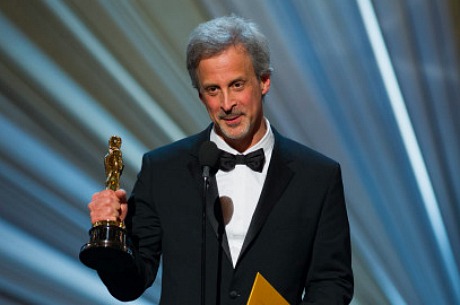 December 17, 2014by Jeffrey Wells5 Comments
« Previous post
The Monsters Own Every House on Maple Street
Next post »
Legendary Put-On Doc About North Korea