Constellations In The Mist

My enthusiasm for Jake Gyllenhaal‘s grinning, bug-eyed, Oscar-contending performance in Dan Gilroy‘s Nightcrawler led me to fork over $140 for a ticket to Nick Payne‘s much-hailed Constellations, a two-hander in which Jake costars with The Affair‘s Ruth Wilson. It’s a short (70 minutes), head-trippy play about love and physics and endless parallel storylines co-existing in a shifty-eyed universe. And about Jake doing a deliciously spot-on British accent (a friend describes his patois as that of a “British Rastawannabe”) as a bee-keeper named Roland, and the British-born Wilson delivering a kind of sad and vibrant and open to all things routine, even in the face of death. 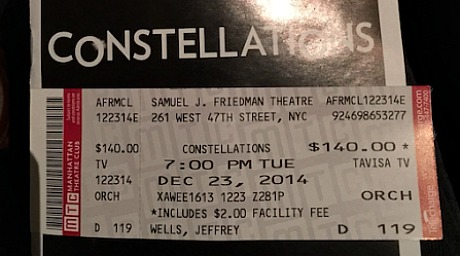 As Wilson’s Marianne, a Cambridge-based physicist, explains, “In the quantum multiverse, every choice, every decision you’ve ever made and never made exists in an unimaginably vast ensemble of parallel universes.” Which is a smarty-pants way of saying that relationships can go any which way depending on any number of variables, and that however you slice it we’re all getting knocked around by random chance.

A New Yorker review of a 2012 London production with Rafe Spall and Sally Hawkins described it as “a singular astonishment, at once eloquent and mysterious but which nonetheless articulates within its own idiosyncratic idiom something that touches an audience as real.” It also said it was on the pathfinding level of Tennessee Williams’ The Glass Menagerie, Heathcote Williams‘ AC/DC and Joe Orton’s What the Butler Saw.

Maybe but performances aside it’s…well, a mixed thing. I can’t honestly agree with the New Yorker guy but what do I know, being a slight theatrical peon? The play is intriguing in a cerebral, meditative sense but it’s all but impossible to get into emotionally because of the start-and-stop, sample-and-discard nature of the way it unfolds, if “unfolds” isn’t too smooth a word for something this choppy and staggered. Constellations is nothing less than fascinating and very cool — I’m very glad I saw it — but it’s a bit of an arm’s length, herky-jerky experience.

Here’s how I put it to a friend earlier today:

“Excellent, touching performances by Jake and Ruth but the play, however brilliantly conceived, is a bit dicey. It’s basically a what-iffer that spends the entire 70 minutes trying on different moods and emotions and revealings this and that way, over and over and over. Two people inhabiting several voices, characters, permutations and fates. A kind of shuffling-the-deck, hopping-around, trying this on for size and then moving on type of deal. Spiritual, celestial, mathematical…almost a kind of board-game feeling.

“Constellations felt to me like more of an acting exercise than anything else, and for that I was generally delighted with both Jake and Ruth.” (Word around the campfire says they’re also happening off-stage.) I really love Ruth’s work in The Affair. Plus the concentration and fluidity of emotion between the two of them…several different performances with the span of 70 minutes. But there’s no discernible flow or gathering of forces or anything building to a payoff. Well, there is somewhat and there’s a certain melancholy introduced around the 40- or 45-minute mark. And the ending is rather good in a Betrayal-type way.

“The crowd was fully respectful at the curtain call. Seven or eight people stood up, some sporadic cheering and vocal attaboys. But I was…well, I certainly respected what was attempted and am extending approvals all around (also to director Michael Longhurst) but I couldn’t quite get off on it.

“Honestly? The white balloon set design seemed affected on some level. A little precious. The balloons are stars, of course, but to me they mostly felt like balloons at a New Year’s Eve party. During the scene in which mortality enters the narrative a few balloons fall to the floor from above. Yes, we get it.”

The publicists behind Constellations want reviews held until just before it opens in January, but I don’t feel bound by this. I wrote and asked for comps last weekend, and if they’d obliged I’d certainly be playing ball. But first they ignored me. Then they said no press comps. And then they said they need 48 hours to get me house seats that I’d have to pay for. So I went to the website and bought a sixth-row orchestra seat for $140. 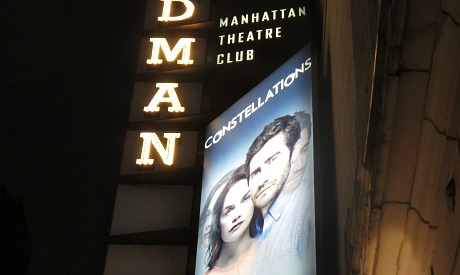