Schultz Suddenly Enraged At Foxcatcher and Miller Over Homoerotic Undercurrents

Bennett Miller‘s Foxcatcher is about how a strange, obsessive, ostensibly Olympics-driven relationship between Pennsylvania millionaire John Dupont (Steve Carell) and former Olympic wrestling champ Mark Schultz (Channing Tatum) led to Dupont shooting Mark’s older brother Dave (Mark Ruffalo). The real-life Schultz has been highly complementary of the film and Miller over the last several months, but he’s suddenly changed his tune and thrown both under the bus, apparently over concerns that the film points to a homoerotic undercurrent between Carell/duPont and Tatum/Schultz. 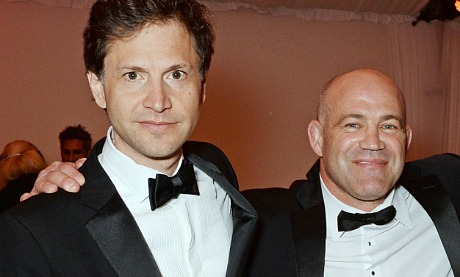 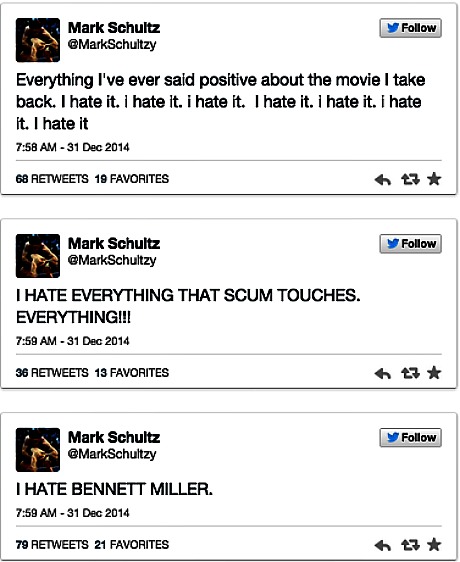 Schultz has totally ripped into Miller on Twitter, calling him “scum” and declaring that “we’re done” and that he’s going to take Miller down, etc. He’s obviously quite upset but why the sudden turnabout? The film opened nearly six weeks ago, but Schultz seems to have suddenly decided that homoerotic interpretations by reviewers are hurting his reputation. It’s possible, I suppose, that Schultz’s Twitter account has been hacked (?). I’ve asked Miller and a Foxcatcher publicist what they know or suspect about this, but you know how people get when something like this blows up — they hunker down and dive into the bunker.

If Schultz has literally tweeted all this stuff it sounds to me like a delayed case of homosexual panic — not literally about gayness but media perceptions of his having had some kind of suppressed gay dynamic with duPont, which Schultz believes is harming his rep. Although he’s written that the gay element in Foxcatcher “wasn’t explicit [and] so I didn’t have a problem with it,” he’s now blaming Miller and the film for slipping this perception into the conversation.

I’m presuming Schultz might also be pissed that Channing portrays him as scowling, emotionally constipated and seriously inarticulate, which usually indicates some degree of emotional repression…but again, why six weeks after the film opened?

If Foxcatcher reps don’t get in front of Schultz’s charges and try to frame them in a fair and proper context, this will probably harm Foxcatcher as far as Academy nominations are concerned, particularly Carell’s possible Best Actor nomination. It gives people a reason to step back and say “hmmm, maybe not…maybe vote for someone or something else.”

“I was already an Olympic and WORLD Champion before I met duPont. The director took my 1985 World Title away in the film. I was not emotionally fragile as critics suggest. I didn’t move to Pennsylvania to wrestle for Foxcatcher. I took an assistant coaching job at Villanova. I never looked up to duPont as a mentor, leader, father figure. He was a lot dirtier the first time I met him and he was drunk. He told me he would have nothing to do with Villanova which was the only reason I went there. duPont was a repulsive sickening freak. I could barely stand looking at him. I never touched him except for a photo at the hall of fame and when I threw him in a headlock for a documentary. I never showed him any moves or taught him anything about wrestling. I never coached him in a wrestling match. I never read any speech he gave me. I never dyed my hair.

“Dave was my older brother, not a father figure. After I won the NCAA’s and Dave took 2nd, Dave started asking me about technique and calling himself Mark Schultz’s brother. I was a 3x NCAA Champion. Dave won once. After 1986 I started beating Dave in practice consistently. I never worked out in the new wrestling complex duPont built in the film. If du Pont ever slapped me I’d have knocked his head off. I never wrestled after Dave moved onto Foxcatcher Farms. I was doing Jiu-Jitsu at BYU. Dave was never a head coach anywhere. I was a Division I University Head Coach for 6 years. Dave was intelligent but no more than me. Just [because] I wasn’t filling the silence with superfluous noise all the time doesn’t mean I was inarticulate. I earned a Masters degree with a 3.6 gpa. I’m a corporate speaker and life coach.

“The movie doesn’t show hardly any of my victories. It focuses on only my losses. The personalities and relationships between the characters in the film are primarily fiction and somewhat insulting. Leaving the audience with a feeling that somehow there could have been a sexual relationship between duPont and I is a sickening and insulting lie. I told Bennett Miller to cut that scene out and he said it was to give the audience the feeling that duPont was encroaching on [my] privacy and personal space. I wasn’t explicit so I didn’t have a problem with it. Then after reading 3 or 4 reviews interpreting it sexually, and jeopardizing my legacy, they need to have a press conference to clear the air, or I will.” 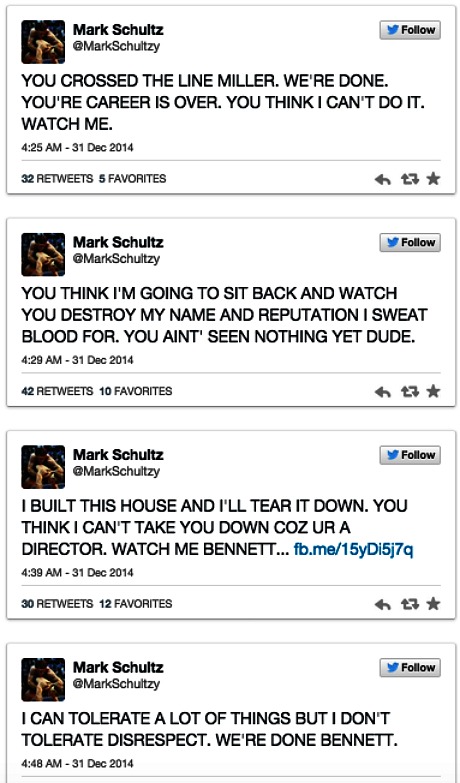