The rumble over the last couple of days is that Sony Pictures Entertainment co-chairman Amy Pascal might lose her job over the North Korean hacking scandal, and more particularly over that recently leaked, acutely embarrassing email exchange between herself and producer Scott Rudin in which they bantered in mock-stereotype-in-quotes fashion about whether President Obama has certain racially-influenced preferences for certain films. An unbecoming thing to have disclosed, yes, but it seems hugely unfair and chickenshit to even talk about firing Pascal because of a silly little chat she had in private with a colleague. Which isn’t, at root, even the issue. Men of character and consequence don’t fire a major executive because of a criminal hacking which was probably paid for by parties allied with the North Koreans. They stand up and look that stuff in the eye and say “take a hike.” 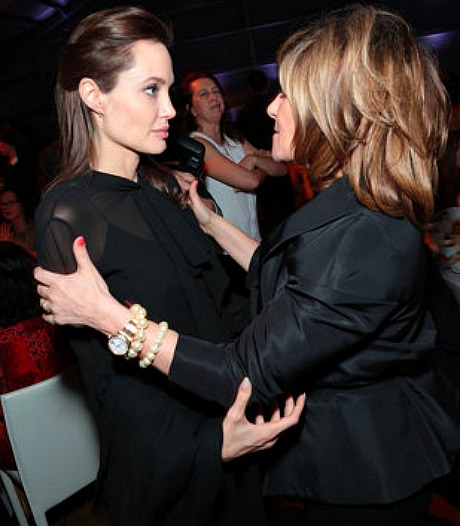 It’s not just the frosty glare that Angelina Jolie gave Sony Pictures chief Amy Pascal at the Hollywood Reporter‘s Women in Entertainment Power 100 breakfast last Wednesday morning, but what her right hand was saying. If there was any kind of comme ci comme ca vibe between these women Jolie would certainly have held Pascal’s forearm. I’ve been there. I know what that look means. It means “take cyanide.” And Pascal wasn’t even the one who called Jolie a “minimally talented spoiled brat” in that hacked email exchange. You have to give Pascal credit for at least trying to be upfront and adult about it.

Life is unfair and everyone is occasionally stunned and bruised by bad luck, but this is ridiculous. Because everybody talks like this to some degree — don’t kid yourself. There isn’t a major executive in this town who wouldn’t have gone along with the drift of that silly conversation if they had been in the room or part of the email thread. It was bizarre for Pascal and Rudin to have spoken in such racially dismissive terms, but it was mainly “schtick,” as Glenn Kenny said the other day. And, most of all, it was private. Powerful people tend to speak bluntly and coarsely with each other. Nobody talks in noble, highfalutin’ terms behind closed doors…trust me. Joshing like an intemperate junior high-school student is a kind of ritual among the powerful. Those who talk in profane “street” language and use crude cultural shorthand are on some level presumed to be more earnest and trustworthy.

If upper Sony management clips Pascal they’ll be essentially seen as having carried out North Korea’s wishes as she’s the one who green-lighted The Interview, a crude and silly Seth Rogen-Evan Goldberg comedy that makes comedic hay out of killing North Korean dictator Kim Jong Un. I’m sure Pascal wishes she’d never approved the film now, but having the license to make a not-that-funny, politically incendiary bromance comedy is what freedom in the United States is more or less about. If you’re a real freedom-of-speech advocate you have to stand by movies like The Interview as well as more admirable forms of criticism or satire or dissent. If Sony honchoes whack Pascal they’ll be seen as North Korea’s obedient little bitches. They need to man up.

Did Pascal and Rudin’s comments indicate a dismissive racial bias? In a sense, yes but in another sense, no. As I speculated on Thursday, it’s unlikely that either would have ever voiced these comments on their own. I believe that the comments came from a third “industry” personality that arose, Frankenstein-like, from the competitive nature of their relationship as well as from the unstated rules of industry camaraderie that all high-level executives live by and subscribe to.