We’re coming to the end of the Fed Ex and UPS freebie screeners. Nightcrawler is coming tomorrow, I’ve been told. Unbroken just arrived 15 minutes ago; the other two were delivered yesterday. The knife is big, long and sharp — a lethal weapon. It’s from the Chef guys at Open Road. 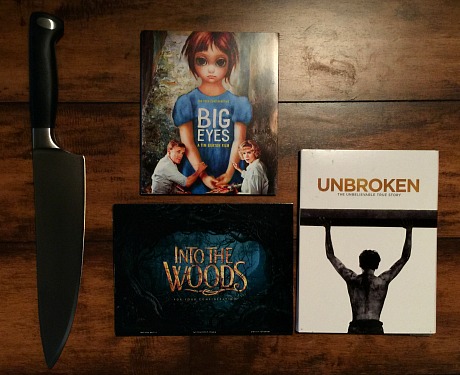 “I had gotten an impression from speaking with Indiewire‘s Eric Kohn that Chef is negligible fluff, but it’s too engaging to be dismissed as such. It’s basically a celebration-of-good-fortune movie…a celebration of perfect, scrumptious art-food (the cooking and serving shots are to-die-for), of clever guy humor and pothole-free narrative charm, of Favreau’s acting and writing skills (as well as John Leguizamo and Robert Downey, Jr.‘s)…okay, it’s fluff but it’s very tangy and alive and well-constructed fluff. It never once reached in and got me in that deep-down place, but I never felt the least bit irked or antagonistic toward it.

“It’s a nice easy cruise, this film. There’s really no substantial reason to put it down with any passion. In fact, Chef is so well crafted and engaging and satisfying that I forgot about the weight issue that I’ve mentioned once or twice. I still say that if Downey had Favreau’s role instead of a cameo, Chef would be that much more engaging. Because it would be. There’s something about a guy with a weight problem that goes against the basic grain of escapism, which is what this movie is basically selling. But I forgot about it. Or at least, it didn’t get in the way. Coming from me, that’s a serious compliment.” — from a 5.5.14 post called “Chef Is Deft and Likable.”