Warner Bros.’ decision to secretly screen Andy and Lana Wachowski‘s Jupiter Ascending (opening 2.6) last night at Park City’s Egyptian theatre didn’t turn out all that well. The Egyptian is a small theatre but the crowd was far from capacity, according to Variety and a couple of tweets, and all were forbidden from reviewing until next week. The elf-eared “space opera” is anything but a typical Sundance-type film, and everyone has been presuming all along that it’s some kind of problem movie so why show it here in the first place? A fair number of Sundance-attending press weren’t invited, were turned away at the door or didn’t even know about the screening, to go by several conversations I had last night.

From Variety‘s Ramin Setoodeh: “Despite the hype of a secret Jupiter Ascending screening, clusters of seats inside the 300-person venue remained empty, and a handful of patrons walked out” — bailed! — “of the two-hour-plus space epic starring Mila Kunis as a princess and Channing Tatum as an intergalactic soldier tasked with rescuing her.

“The Wachowskis’ flair was fully on display, with sequences reminiscent of The Matrix or Star Wars. But when the film ended, the usually gracious Sundance audience didn’t clap at the closing credits.

“‘I hated it,’ said one of the festival’s volunteers, who asked not to be identified for fear of irking Sundance. ‘It’s just ridiculous.’ 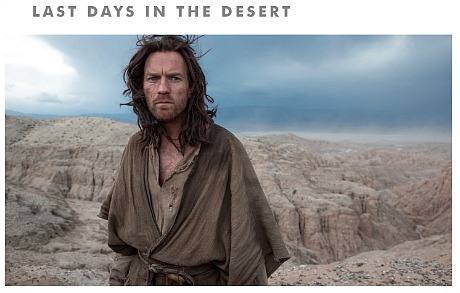 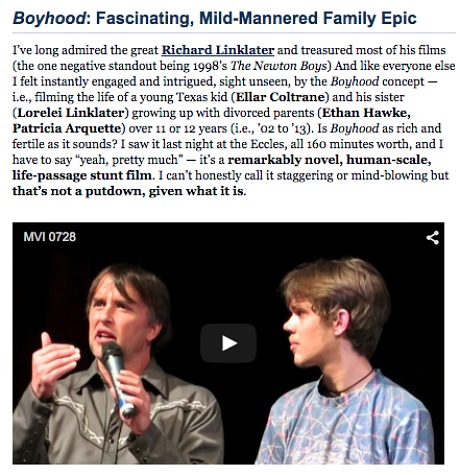 All hail Grantland‘s Wesley Morris for looking askance at the bizarre euphoria that has greeted Rick Famuyiwa‘s Dope, and for standing on my side of the debate. “You can see Famuyiwa going for a certain class of skuzzy Los Angeles odyssey, like the ones of Quentin Tarantino and Paul Thomas Anderson,” Morris observes. “[But] this is more like Doug Liman‘s Go, which was like Kwik-E-Mart Tarantino. But Dope isn’t made with even the sustained wit of Go. It has its moments, all of which involve the attempt to humorously unpack racial baggage. There just aren’t nearly enough. 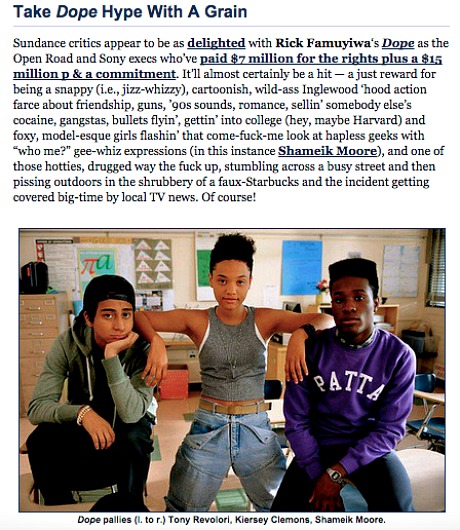 And yet Dope “has been the most hotly auctioned film of the festival,” Morris notes. “I don’t know whether Open Road and Sony Pictures, who’ve acquired Dope, went for it because it feels, to them, authentically black or because the blackness is familiar to the world’s marketplaces.” Or because Famuyiqwa is supplying the kind of “black shit [that] white people like.”

In a 1.27 q & a with Variety‘s Brent Lang, the Going Clear guys — director Alex Gibney, whose doc about the malignancy of Scientology is arguably the finest and most riveting film to play at Sundance ’15, and author Lawrence Wright, whose book is the basis of Gibney’s film — call on Tom Cruise and John Travolta to wake up, man up and speak out against Scientology’s abusive practices.

Gibney: “By now there is a well-documented record of abuses in the Church of Scientology, yet Cruise and Travolta have never spoken out about them. By not speaking out, it’s a kind of an endorsement and I think that’s why we’re right and properly critical.”

Wright: “They’re selling a product and the product they’re selling is oppressing some of the people inside the church, especially the clergy, which is called the Sea Org, and Cruise has spent countless hours out on the Sea Org base where — on that same base where he has a special chateau — there [are] these double-wide trailers called the hole, which is a kind of re-education camp where people have been incarcerated for years. Sleeping on the floor on bedrolls with ants crawling around, abused physically, made to lick the floor or the toilet with their tongue. It’s just unbelievable degradation.

Some superhero movies (like the two Captain America flicks) are just good films, but the superhero megaplex virus is fed by a widespread sense of diminishment, impotence and insignificance, felt most acutely by under-35s who are either just starting to realize or have recently realized how un-heroic and unexceptional their lives are likely to be. On the other hand Miles “don’t be a pervert, man” Teller is one of the paycheck fantastics.