41 years ago Michael Corleone said quietly and solemnly to his wife Kaye, with whom he’d been arguing, “I’ll change…I’ll change…I’ve learned I have the strength to change.” That was bullshit, of course, but it reminded viewers of The Godfather, Part II that achieving change in one’s life is awfully damn hard. Age itself stands in the way, especially when you pass 40. Supportive “friends” and family also get in the way for their own reasons. And if you’ve become successful at doing a certain thing, your fans (i.e., people who’ve been buying your “product” for years) are especially resistant to a new brand. Which is why I respect Jennifer Aniston for saying to the industry over the last couple of months, or since her Cake campaign kicked into gear, that she wants to shed the old skin.

She really appears to want that, and it takes guts to stand alone and say that. Because in so doing she’s also kind of admitting that…well, that perhaps she could’ve tried harder or maybe took the too-easy path, relying a bit too much on her comedic gifts. Or maybe she’s saying that she wanted what she wanted before, but today is now, today is different. 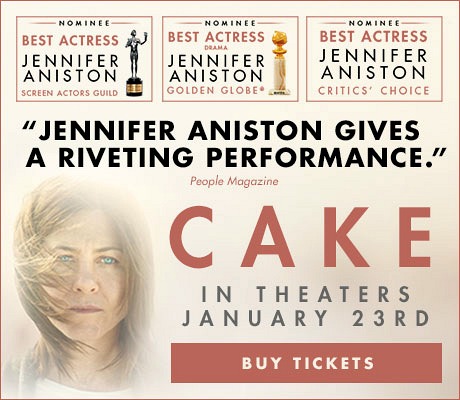 Aniston’s performance as a wealthy, pain-besieged woman is quite deft and precise. She’s always been a good actress who knows exactly how to convey whatever flickers of feeling might be happening within. Cake is no one’s idea of a great film but it’s good enough to snag our attention and ask us to consider how good Aniston, upon whom, the entire film rests, is. I’ve said before that Aniston really gives it hell, and that she can be quite subtle and on-target, always letting you know what’s happening with just the right amount of emphasis. If you ask me she almost didn’t need to make herself look frumpy and haggard with the brown stringy hair and somewhat heavier appearance. It almost might have been more startling if she’d merged her natural blonde and lithe self with the hurt and the struggle and the Percocets.

L.A. Times critic Betsy Sharkey disagreed a few weeks back. She wrote that “ugly-ing Aniston up in Cake frees her from all of the preconceptions pop culture has been imposing for so many years. Friends ended a decade ago, so give it a rest, people. But no one does. Social media and the tabloids serve her up in almost daily doses — Jen swimming, Jen smiling, Jen with friends, Jen with boyfriend, Jen without boyfriend, Jen with boyfriend again.” Thus in Cake Aniston “has never looked worse or perhaps performed better…it is a serious treat to see the actress stretch herself.”

Will Aniston ever climb out of the box that she’s been in for the last nine years (jilted by Brad, tabloid queen always with the hot bikinis in Mexico, light comedienne)? Will she continue to try and…well, at least alternate her more commercial efforts with serious indie-cred movies like Cake in a kind of George Clooney-ish vein? Maybe she will or maybe not, but people respect the effort to at least try to climb out of the old bag. As I wrote a few weeks ago, Aniston “went to bat, coughed up the coin and delivered in a sturdy, applaudable way, and now she’s looking for a little acknowledgment and respect. She’s got it from me.

To be perfectly honest this piece is a kind of mea culpa as I myself was a doubter and a snarker. I wrote last summer that I didn’t want to know from Cake because of my prejudices. I wrote that I’ll follow Amy Adams or Jessica Chastain or Anne Hathaway into this realm, but Aniston presents an obstruction. Not that I didn’t like to. I just felt constrained. Mainly because of her super-toned bod and frosted blonde hair and her SmartWater and Aveeno endorsement deals and being worth about $150 million and her unrelenting presence in the supermarket tabloids, etc. A little tougher to get into that suspension-of-disbelief thing.

Then it hit me. Have I ever had such thoughts about Julia Louis Dreyfuss, who’s worth over a billion and also wears bikinis in Mexico or wherever? The answer is no — I never have. And then I felt badly for dismissing Aniston without fair cause, and then I told myself I need to pull back on that. And so I have. Sorry. Onward, forward.