The five nominees for the DGA Award for Outstanding Directorial Achievement in Feature Film for 2014: Wes Anderson {The Grand Budapest Hotel}; Clint Eastwood {American Sniper}; Alejandro G. Iñárritu {Birdman or (The Unexpected Virtue of Ignorance)}; Richard Linklater {Boyhood}, and Morten Tyldum {The Imitation Game}. Another indication of a male-dominated industry, right? That’s really, really it for Selma, I’m afraid — shut-out every which way. We all suspected for the last six weeks that Angelina Jolie‘s Unbroken wasn’t acquiring any traction, but the DGA guys have made this clear. If it had been me I would have nominated Whiplash‘s Damien Chazelle instead of Eastwood, no offense. That obviously mechanical baby that Bradley Cooper was holding in Sniper should have disqualified him. That creepy little arm took me right out of the film. And if not Chazelle then Gone Girl‘s David Fincher or Nightcrawler‘s Dan Gilroy….c’mon. 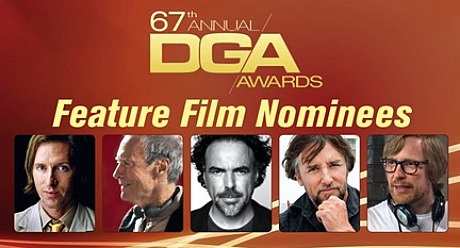 January 13, 2015by Jeffrey Wells35 Comments
« Previous post
How About Matt Damon As Bruno Opposite Affleck’s Guy Haines?
Next post »
Don’t Kid Yourself