The cover of the latest issue of The New Yorker depicts the late Eric Garner, Trayvon Martin, Martin Luther King, Jr., Michael Brown and NYPD Officer Wenjian Liu marching together, arm in arm — united against hate, bigotry and particularly violence, as they all met their doom from…actually, it’s not that simple. Two of them died at the hands of armed assassins — haters who fired coldly, deliberately. The other three died in racially-charged altercations that could and should have been avoided if tempers on both sides had been cooler — not quite as cut-and-dried. I just wonder how Dr. King would feel about being depicted as morally and spiritually allied with and in a sense occupying the same historical station as Brown, who was no sweetheart. A roughly similar image would be a New Yorker cover depicting a group of famed World War II figures marching side by side — George S. Patton, Omar Bradley, Douglas MacArthur, James Doolittle, Ernie Pyle and Eddie Slovik. 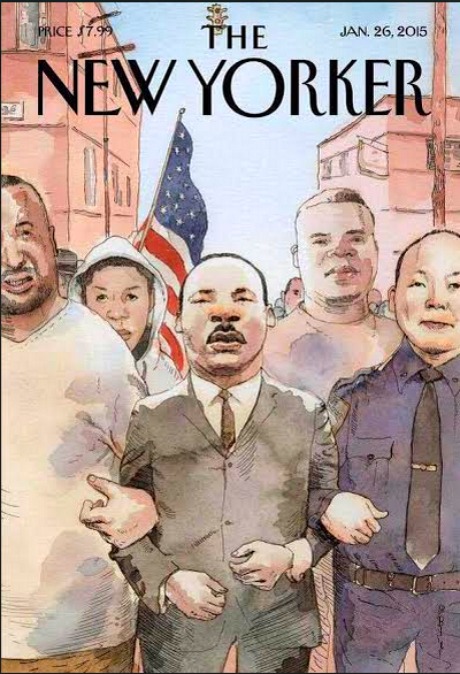 From the New Yorker website: “Barry Blitt drew next week’s cover, inspired by the photographs of the Selma-to-Montgomery march that are everywhere again. ‘It struck me that King’s vision was both the empowerment of African-Americans, the insistence on civil rights, but also the reconciliation of people who seemed so hard to reconcile,” he said. “In New York and elsewhere, the tension between the police and the policed is at the center of things. Like Trayvon Martin and Eric Garner, Michael Brown and Officers Wenjian Liu and Rafael Ramos, Martin Luther King was taken way too early. It is hard to believe things would have got as bad as they are if he was still around today.'”