I’ve been told I need to add Jay Roach‘s Trumbo, a biopic of once-blacklisted screenwriter Dalton Trumbo, to HE’s list of notable, aspirational 2015 films. The period drama, filmed last fall in the New Orleans area, stars Bryan Cranston as Trumbo, one of the most prolific and honored screenwriters in Hollywood history. Costars include Diane Lane, Elle Fanning. Helen Mirren and John Goodman. Dalton Trumbo is renowned for having used “fronts” or having otherwise taken no screen credit for scripts written during his blacklisted period in the ’50s. Kirk Douglas, who claimed credit for being the first to hire Trumbo under his own name on Spartacus, is played by Dean O’Gorman; Otto Preminger, portrayed by Christian Berkel, paid Trumbo the same respect when he gave Trumbo public screen credit for his work on Exodus. Preminger’s film came out two months after Spartacus but who stepped up first? Douglas states on a Criterion commentary track that he provided a drive-on pass for Trumbo during the filming of Spartacus in late ’59 or early ’60. David James Elliott plays Trumbo enemy and rightie rabble-rouser John Wayne. Pic is produced by Michael London‘s Groundswell Productions. 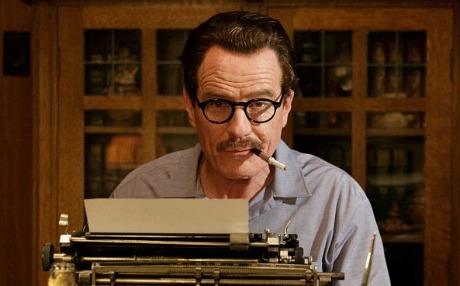 Bryan Cranston as screenwriter Dalton Trumbo in Jay Roach and Michael London’s Trumbo. Pic no release date but will probably pop six months from now at one of the August-September film festivals — Venice, Telluride or Toronto.