You’d think that a drama directed by the widely respected Jonathan Demme, written by Diablo Cody and starring Meryl Streep and Kevin Kline would at least theoretically warrant an award-season release. Except TriStar, which is not exactly known as a distributor of prestige-level, award-worthy cinema, is opening Demme’s Ricki and the Flash, on Friday, August 7th — a date that more or less confirms that Ricki is not an awards conversation-type deal. TriStar would surely give it a post-Labor Day release, or better yet one in October or November, if it was. In a 2.4 post, In Contention‘s Kris Tapley notes that the 8.7.15 release date “is a little bit odd“, adding that “sometimes early August releases work out for awards season, sometimes not.” Mostly not, he means. Wells to Tapley: If you were TriStar and you had a Jonathan Demme movie that you suspect will attract award-season acclaim, would you release it on August 7th? Wouldn’t you at least open it in Venice or Telluride or Toronto? TriStar obviously has a different kind of game plan. Ricki and the Flash is the first high-pedigree, seemingly interesting 2015 film to be…I don’t want to say dumped but that release date has certainly lowered expectations all around. 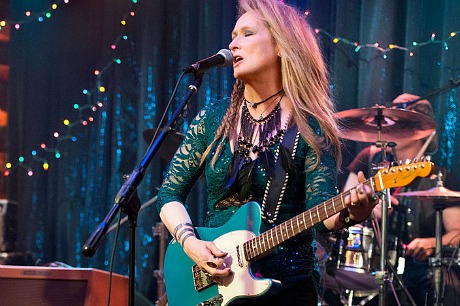 Meryl Streep as a long-of-tooth rock star in Jonathan Deme’s Ricki and the Flash.