The Fog of Mamet

After seeing Focus I naturally wanted to flush it out of my head, and I figured the best way to do that would be to see a really good con-man movie. So I bought a DVD of David Mamet‘s The Spanish Prisoner (’97). I’m pleased to report that it arrived yesterday and I’ll be watching it sometime later today. But here’s the odd thing. I haven’t seen it in 18 years (i.e., the 1997 Sundance Film Festival) and I can’t remember a single damn thing about it. Okay, I can recall three things. One, it was enjoyed and well-reviewed by the Sundance crowd. Two, Campbell Scott, Rebecca Pidgeon, Steve Martin and Ben Gazarra were the main costars. And three, it had a sly, measured vibe that was definitely pitched to older, smarter adults, and which everyone felt flattered by. Is this a new HE topic? Movies that (a) have a sterling reputation and (b) that you’re dying to see again, but which (c) you have no specific memories of. I can’t remember anything about Mamet’s Heist either, but I know I was favorably disposed when I saw it 13-plus years ago. 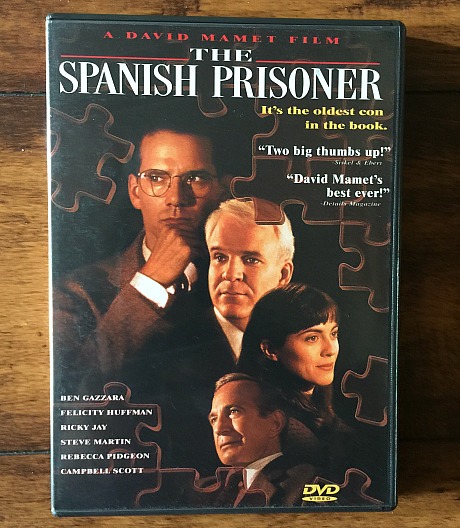