Forgot To Say Thanks

There was a period between my 20th and 21st birthday when I had no job or goals or academic engagement…nothing. I was in my Bhagavad Gita mystical phase, no fooling, except the constant urge to party and frolic and basically pursue the spiritual pretty much dominated everything. Partying and then recovering the next day so I could party again the next night…well, there was actually more to it than just that. It’s not that I didn’t try to have a kind of “life.” I would land a job I hated and then lose that job. I read the New York Times every day but I ingested a lot of substances and did a lot of sleeping and day-dreaming. I dabbled as a dealer of pot and hallucinogens. Occasional tripping, hitchhiking, chasing girls, wherever the day took me…bars, parties, music and especially (this was huge) lying totally ripped on a floor with two smallish Marantz speakers on either side of my head. 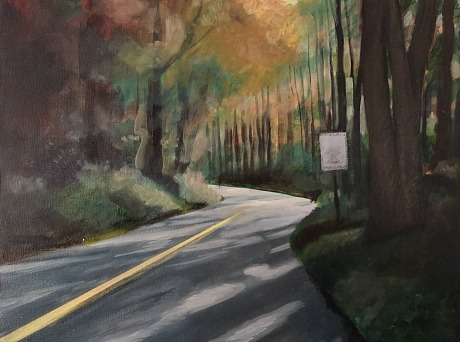 Chance Browne painting of Seir Hill Road in Wilton, Connecticut. My parents’ home was around the bend and down the road a piece.

I forget how many times this happened but I’d say at least 15 or 20. Laura was there for me every time. I’m not saying she acted in some extraordinary fashion but she did the good, kind thing.

Laura’s schizophrenia became pretty aggravated around then, and the truth is that we didn’t have very much to say to each other through the ’70s, ’80s and ’90s. She had a much higher IQ than I (or so I was told) but she was pretty much off the rails. Laura had a hard life. I took her to Italy (San Donato, Rome) with me in ’03 — that was pretty much the summit of our adult bonding. Laura died of cancer in April of 2008, and it just hit me this morning that I never told her how extra double thankful I was for all those times she gave me the gift of a warm, snug sleep on the floor of my bedroom closet. If she could read this or perhaps hear me on some level…