Invaders Has All But Disappeared

No devotee of mind-bending, zeitgeist-reflecting cinema will deny that William Cameron Menzies‘ Invaders From Mars (’53) is one of the most essential sci-fi films of all time — a spooky, purposefully unreal, intensely nightmarish thing that used kid-POV storytelling, surreal dreamscape images and one of the all-time creepiest scores ever composed. (The stone genius behind the famous “sand choir” theme was Raoul Kraushaar.) Last night I thought it might be fun to watch Invaders again via Amazon HD streaming, but it’s not available. On any streaming service apparently. And there’s only one DVD left, according to Amazon, and it’ll cost you $177 dollars plus shipping. That’s because the last DVD release, courtesy of the long-defunct United American Video, came out 13 years ago and nobody has re-upped. A Bluray of Invaders From Mars, which is 18 or 19 times better than Tobe Hooper‘s 1986 remake (which is being being Bluray’ed in April), might not be economically feasible, but an HD version should be streaming at the very least.

The bad guy here. I’m told, is Kansas City-based rights-owner Wade Williams, who holds the rights to Invaders From Mars and owns the original elements. Williams apparently won’t let anyone do a digital HD upgrade without being paid an exorbitant, completely unrealistic fee. Williams is regarded as a notorious “rights squatter” who thinks and operates in the mule-headed tradition of Raymond Rohauer. 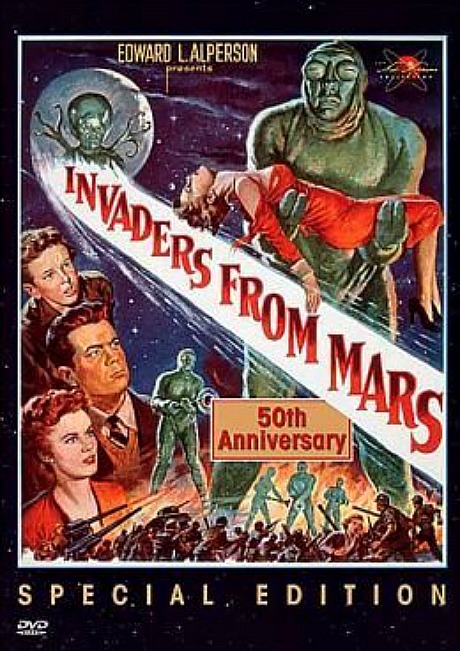 From the Wiki page: (a) “An Eastmancolor negative was used for principal photography, with vivid SuperCinecolor prints struck for the film’s initial theatrical release to provide an oddly striking and vivid look to the film’s images; standard Eastmancolor prints were used thereafter on later releases”; (b) “The Martian heat-ray effect showing the bubbling, melting walls of the underground tunnels was created by shooting a large tub of boiling oatmeal from above, colored red with food coloring and lit with red lights“; (c) “[The] cooled, bubbled-up effect on some areas of the blasted tunnel walls was created by first using inflated balloons pinned to the tunnel walls. But in film tests they looked like balloons stuck to the walls, so the effects crew tried smaller inflated latex condoms. Further testing showed these looked much more convincing, and the crew wound up inflating more than 3,000.” 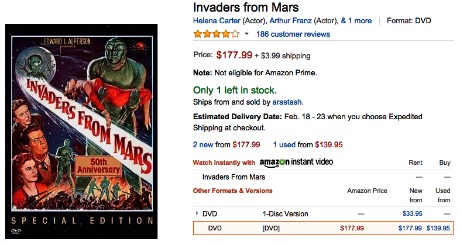 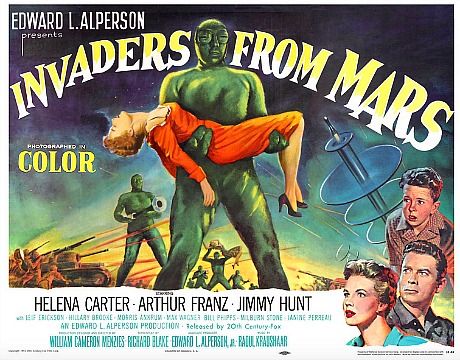 February 14, 2015by Jeffrey Wells32 Comments
« Previous post
“Goldie, How Many Times Have I Told You Guys That I Don’t Want No Horsin’ Around On The Airplane?”
Next post »
Last-Minute Reminder