An Olive Films Bluray of Billy Wilder’s old-hat, close-to-excruciating Kiss Me Stupid streets tomorrow. No way am I buying or watching it. I’ll watch almost anything in black-and-white Scope, which I happen to be queer for, but I draw the line at Kiss Me, Stupid. It’s not so much the overbearing lead performance by Ray Walston, who was hired at the last-minute when Peter Sellers suffered a heart attack, and Kim Novak is…well, not too bad even though Polly the Pistol is a pathetic character. It’s Dean Martin I can’t stand. He’s playing himself here — a rich, big-name Italian crooner who’s so smug and lazy he can barely say his lines without putting himself to sleep…thinks he’s the center of the universe but in fact is completely out of swing with mid ’60s culture and doesn’t know it and doesn’t care, and who has no funny lines…just a smug, oily-haired lech trying to bang Novak while getting half-bombed. 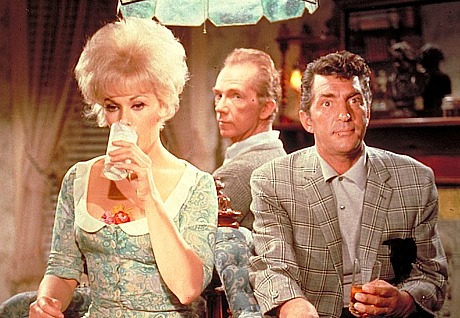 (l. to r.) Kim Novak, Ray Walston, Dean Martin in a rare color snap from the set of Kiss Me Stupid. 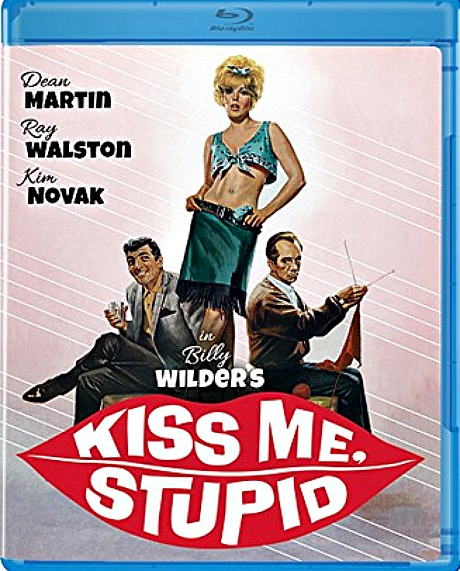 From a 3.27.11 Glenn Kenny Some Came Running piece called “I’m With Stupid: “One thing I find perverse enjoyment in with Kiss Me, Stupid, is its coarseness, or more precisely the way that coarseness manifests itself. It was made just as the sexual revolution was revving up and the studio system was circling the drain. While Wilder’s comic sensibility was always at least partially about pushing a joke or double-entendre past whatever the acceptable breaking point for the Breen Office was, the man himself was in some ways a bit of a prig. His ’60s films were getting more and more frantic, but with Kiss Me, Stupid, there’s an almost palpable sense of Wilder saying ‘screw this.’

“Dean Martin biographer Nick Tosches, no slouch at coarseness himself, describes the Wilder/I.A.L. Diamond script for Stupid thusly: ‘Kiss Me, Stupid was as sordid an idea as had ever been proposed for a movie comedy. Wilder [and Diamond] had written…pictures that were sexy in an insouciant, sweet sort of way. But their screenplay for Kiss Me, Stupid was downright, leeringly sleazy. Sex and venality lay at the heart of every dirty laugh.’

“Wilder, the disciple of Lubitsch, for some reason decided to replace the Lubitsch ‘touch’ with a haymaker. To sap from it all of its humanity and compassion.”