“If there’s any good news here, it’s that, despite rumors to the contrary, Accidental Love is very much a coherent movie. It’s not incomplete; it’s just been sloppily completed—cobbled together, in other words, by [distribution guys] looking to salvage a releasable product out of footage crying out to be reshot or reworked. Yet traces of David O. Russell’s spirit, a humane screwball exuberance, poke through the compromised results. It’s there in the way the movie keeps stuffing a bunch of yammering eccentrics in a room together, and also in the bug-eyed performance the director coaxes out of Jake Gyllenhaal, whose character — a flip-flopping, libidinous politician — could have fit neatly into American Hustle. Russell fans owe it to themselves to see this disowned disaster, painful as that act of completism will be.” — from A.A. Dowd‘s A.V. Club review of a facsimile of Russell’s never-completed Nailed, partially shot in ’08 and now called, as noted, Accidental Love and currently viewable on VOD. I’ve been wondering about this film for over six years and tonight, finally, I finally get to see it. 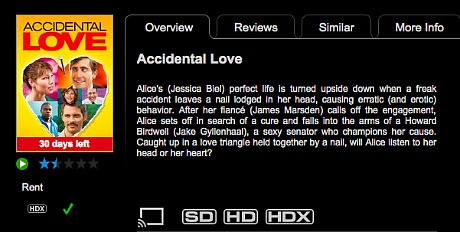