In an EW exclusive, Jesse Eisenberg‘s appearance as Lex Luthor in Zack Snyder‘s Batman vs. Superman: Dawn of Justice (WB, 3.25.16) has been revealed in a black-and-white portrait. Snyder to EW‘s Keith Staskiewiczs: “He’s not any of the Lexes that you’ve seen, that’s for sure, other than him being a captain of industry and one person to the world and another person to himself. And bald, of course.” 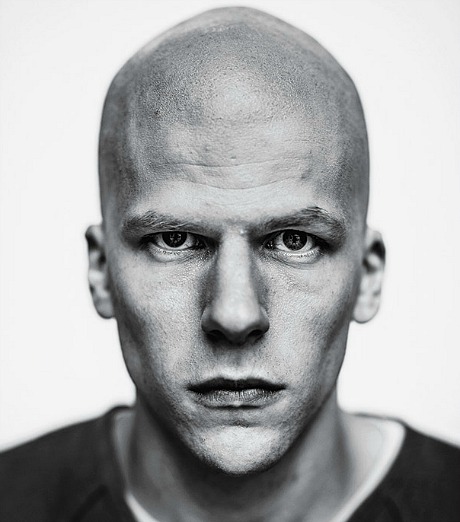 Non-invested adults, on the other hand, know the truth of it. Snyder’s “of course” is what’s known as a classic obiter dicta — i.e., words in passing that give the game away. They reveal who and what Snyder is deep down — a dutiful lapdog who stylistically modifies here and there but basically kowtows to corporate mandates and fan expectations and in no way redefines.

If Snyder was a man of vision he would say, as I more or less said in a 2.4.14 riff called “Gleaming Cue Ball, “Fuck the bald head.” My exact words: “Eisenberg has to play the part bald because Lex Luthor was drawn that way decades ago? What’s the difference? If you’re truly creative, you can do anything you want. Eff D.C. Comics tradition. Break on through to the other side.”