Yesterday Variety ran a James Rainey profile of Shivani Rawat, a 29 year-old woman of Indian heritage and financial privelege who’s running ShivHans Pictures, a Manhattan-based production company focusing on low to medium-range budgets ($8 million to $14 million). The money is coming from 5-Hour Energy honcho Manoj Bhargava, described in the piece as Rawat’s godfather and a close friend of her investor father, Mahipal Rawat. 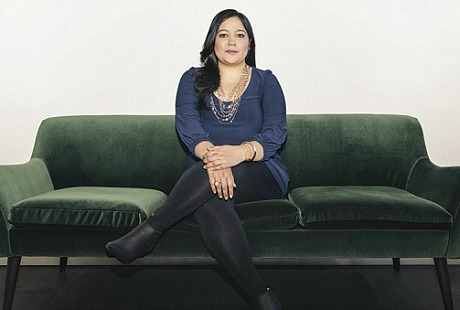 Fogelman tells Rainey that Ms. Rawat could be “the next Megan Ellison.” Whoa, whoa, whoa. There are two noteworthy similarities between Rawat and Ellison, both being 29 and both having used family (or, in Rawat’s case, extended family) wealth to buy their way into elite film circles. But in one instance at least, they seem to part ways in terms of having an eye for quality.

Ms. Ellison clearly has sublime taste, having produced Zero Dark Thirty, Foxcatcher, Her, American Hustle and Richard Linklater‘s forthcoming That’s What I’m Talking About. But Ms. Rawat’s taste buds may be less refined, at least as far as her reportedly impassioned support of Danny Collins is concerned.

Don’t kid yourself — Danny Collins (opening today) is a so-so, somewhat manipulative family tearjerker about an old louche rocker (Al Pacino) looking for emotional redemption, and it’s not going to do all that well commercially. (Here’s my review.) Anyone who’s been around will tell you it is neck-deep in cliches and awfully hard to swallow in some respects. But according to Rainey’s article, Fogelman’s script won Rawat’s heart in a flash when she first read it in 2012. “Ten pages in, tears began to pool in her eyes,” Rainey writes. It wasn’t long after this meltdown that Rawat “told her future head of acquisitions, Nimitt Mankad, ‘We are making this movie.'”

I’m not saying Rawat is without reasonably good instincts. I’m presuming that Trumbo, a period biopic about blacklisted screenwriter Dalton Trumbo, will be above average (Michael London, one of its producers, is a seasoned pro who generally operates within the Tiffany or near-Tiffany realm) and here’s hoping Captain Fantastic will turn out to be a much better film than Danny Collins. But that instant Collins love that Rainey wrote about is worrisome. If I was Manoj Bhargava I’d be shifting in my chair, clearing my throat and going “hmmmm.”