Like Al Capone, Vladimir Putin evidently feels it’s necessary to elminate those who would threaten his empire. Capone’s Wiki bio says his palm prints were on 33 gangland murders between 1923 and 1930; it is believed that the Putin gang is directly or indirectly responsible for six killings. There can’t be much difference between a leader who kills six vs. one who kills 33. Ruthless is as ruthless does, and there’s clearly something afoot in Russia that’s similar to 1920s Chicago. The political arena is ferocious — increasingly defined by bullying, blood and bullets. Andrey Zvyagintsev‘s Leviathan was more on target than most people realized, and 99.5% of the American public couldn’t have cared less. It’s made a grand total of $874,000 since opening on 12.25.14. 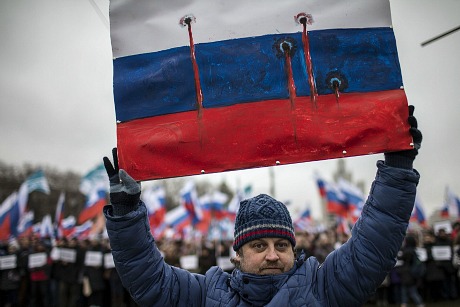 “In all likelihood no one in the Kremlin actually ordered the killing — and this is part of the reason Mr. Nemtsov’s murder marks the beginning of yet another new and frightening period in Russian history,” Masha Gessen has written in a N.Y. Times op-ed piece. “The Kremlin has recently created a loose army of avengers who believe they are acting in the country’s best interests, without receiving any explicit instructions. Despite his lack of political clout, Mr. Nemtsov was a logical first target for this menacing force. The message [behind his murder] was clear: People will be killed in the name of the Kremlin, in plain view of the Kremlin, against the backdrop of the Kremlin, simply for daring to oppose the Kremlin.”