What Do Variety, N.Y. Times Have Against Brand Doc?

Today Variety‘s “staff” ran a wrap-up piece about “13 break-out movies” that played at 2015 South by Southwest. Three days ago a similar N.Y. Times piece, written by Mekado Murphy, highlighted the “South by” films that were “the talk of the festival.” There were some overlaps but well over 20 films are included in the two articles, and yet neither mentions Ondi Timoner‘s BRAND: A Second Coming, a nearly two-hour doc about the transformation of Russell Brand from hyper libertine to social revolutionary. 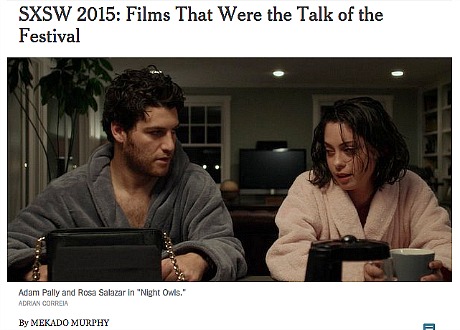 This despite Timoner’s film having (a) opened SXSW to the usual hoopla, (b) won thoughtful praise from nearly every critic who reviewed it and (c) reportedly played to more than the usual rousing receptions at three separate showings. Several strong films played at “South by” and everyone, of course, has their special favorites, but how did these articles manage to completely ignore one of the festival’s most invigorating crowd-pleasers? Not to mention one of the most politically pointed films of that Austin gathering, and one that will likely cause a stir when it opens commercially later this year.

There’s no sensible rationale for both publications blanking the Brand film except for….what, some unacknowledged agenda or unspoken prejudice about Brand himself, who some still regard as an eccentric party animal because he played the same spirited eccentric in Forgetting Sarah Marshall, Arthur and Get Him To The Greek? Timoner’s film is about how Brand gradually took things in a political direction and became a very different bird over the last three or four years. Perhaps Murphy and the Variety guys, like many filmgoers, are averse to boat-rocking political films and tend to prefer ones that focus on simple human behavior? Which allow moviegoers to come to their own conclusions?

If there’s one slogan that sums up BRAND: A Second Coming, it’s “either you get it or you don’t.”