It took me long enough but last night I finally saw It Follows. I had access to an online screener but I decided to pay $14 and change to see it at the Grove. It’s skillfully shot, somewhat different, silly here and there but definitely scary. (The 60something stalking woman really got me.) And funny at times. Love those 360 degree pan-arounds. Congrats to director-writer David Robert Mitchell, whom I met and interviewed five years ago in Cannes where his first film, The Myth of the American Sleepover, had its big debut. Horror queen Maika Monroe runs and screams and freaks with conviction — a good job. But the stand-out performer, for me, is costar Daniel Zovatto, who also costarred in Laggies.

One note of confusion: The rule, of course, is that Monroe can escape the stalking curse only by passing it along to someone she has sex with. So why were we shown that scene where she undresses on the beach in order to swim out to a boat with three guys on it? I thought she was going out there to rid herself of the curse by doing those guys. Mitchell doesn’t show anything but lets us think she might have had sex with one or all of them. Then Monroe has sex with Paul (Keir Gilchrist), a loyal, geeky-looking friend who’s been mooning over her for the whole film, and there’s an implication that Paul (and not those three guys on the boat) is now the carrier of the curse. If so, fine. Creepy but fine, I mean. (I kind of sensed early on that Paul would offer to take the curse off her back.) But what was the deal with swimming out to the boat? 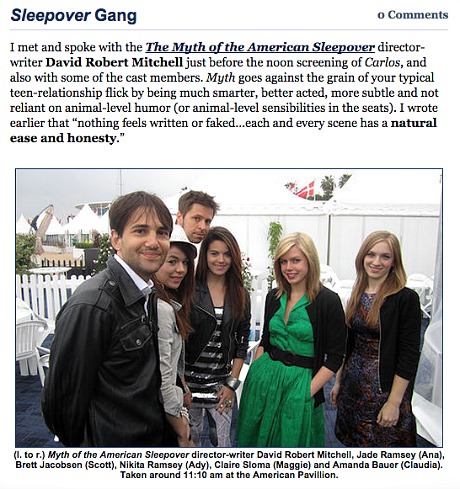