I’ve never been a huge fan of CinemaCon product-reel shows. The emphasis is always on rumbling, pounding, gut-slamming wham-o-rama rather than intrigue and seduction, but big-studio trailers have been operating this way since the ’80s. They all say “we know you’re looking for a ride rather than a film, and that you’re probably ADD-afflicted and texting someone while you watch this so we’re cutting and scoring this trailer in order to snag your attention for 60 seconds or so.” This is mostly what I was feeling from yesterday’s Warner Bros. presentation at CinemaCon — a series of attempts to make you want to try this or that Magic Mountain ride rather than watch this or that movie. 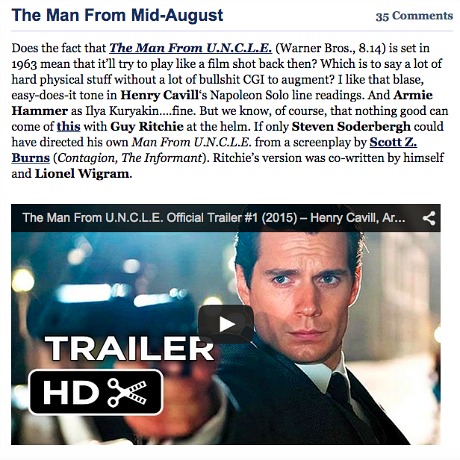 I realize, of course, that Warner Bros. occasionally makes and distributes films that aren’t aimed at Shallow Hals (American Sniper, Her, Inherent Vice) but they’re not really in the business of trying to entertain semi-educated adult film mavens. That notion flew the coop a long time ago.

From my balcony seat I saw four trailers for Warner Bros. films that (a) didn’t feel theme-park-y or franchise-y or cloying or aimed at submentals and (b) appear to be about semi-adult, character-driven situations and didn’t necessarily involve monsters or supercool heroes or chase scenes or explosions.

The most distinctive seemed to be Scott Cooper‘s Black Mass (9.18), a fact-based drama about notorious ex-Boston crimelord Whitey Bulger. It was clear from the footage that Johnny Depp‘s striking, atypical performance as Bulger is going to be in Best Actor contention. Heavy makeup, a steely demeanor, a voice that I’ve never heard come out of Depp before — he’ll be in “the Derby”, for sure.

The footage for Ron Howard‘s In The Heart of The Sea (12.11) goes to the moon to make it seem like a whale-as-Godzilla film, but I’m assuming this is a standard deflection. Nathaniel Philbrick’s 15-year-old novel is mainly a survival at sea thing. WB is clearly planning a Best Picture campaign.

The third exception to the rule seemed to be Ryan Coogler‘s Creed (11.25).  At first glance it seems like a formulaic spinoff of the Rocky franchise as it’s set in Philadelphia, is about training for a big fight and costars Sylvester Stallone. But I sensed it might turn out to be more than the sum. You have to give the benefit of the doubt to the director of Fruitvale Station, right? Boilerplate: “Adonis Creed (Michael B. Jordan), the son of Apollo Creed, travels to Philadelphia where he meets Rocky Balboa (Stallone) and requests that the elder boxer train him.” Sly is basically playing Burgess Meredith with Jordan playing Stallone as he was 39 years ago. Creed began shooting only about three months ago (i.e., 1.19.15).

The fourth exception is Nancy Meyers‘ The Intern (9.25), but it seemed so light and “charming” and inconsequential that I couldn’t engage…sorry. Robert De Niro as a 70something intern at a company run by Anne Hathaway…got it.

The only Warner Bros. film that doesn’t feel like a slamdunk hit and which might actually be a flop is Guy Ritchie‘s The Man From U.N.C.L.E. (8.14). It looks and feels like the same old espionage derring-do stuff (even if it’s set in early ’60s Europe), and it just doesn’t feel necessary. There’s no big hook here, and I don’t think costars Henry Cavill and Armie Hammer are a big enough draw to make a difference. If U.N.C.L.E. has been made by original director Steven Soderbergh it would be something else, but Ritchie’s version feels like a weak sister. Cavill and Hammer seem able and charming enough but this would probably tank even if Tom Cruise and Brad Pitt were starring.