“Why would anyone write about a Roy Andersson film? You might as well dance about a cake. The Swedish director’s Living Trilogy, which began 15 years ago and concludes with this sublimely ridiculous piece of filmmaking, stands apart from the rest of cinema at such a remove that trying to make sense of it in words is beside the point, and perhaps impossible.

“You just have to watch it, then grab a net and try to coax your soul back down from the ceiling.

“Imagine Jacques Tati stuck in Ingmar Bergman’s spare room and you can just about start to picture the strangeness of A Pigeon Sat on a Branch Reflecting on Existence — the winner of the Golden Lion at last year’s Venice Film Festival and one of the very best films you can see this year.” — from Robbie Collin‘s five-star Telegraph review.

The praise being heaped upon Pete Docter‘s Inside Out (Disney, 6.19) is correct. It’s very fast and clever and superbly rendered. And surprisingly, even head-spinningly complex at times, which is to say adult-friendly. And rather touching at times. I was impressed, engaged and amused as far as it went, given my general loathing for animation. Docter and his team take a wowser idea — comedically depicting the push and pull within the head of Riley, a 10 year-old girl, that lead to various emotional states — and make it come alive with ingenious writing, animation and voicing. Riley’s every waking moment is processed and responded to by five primal instincts — joy, fear, anger, disgust (or what I prefer to call aesthetic distaste, which you need in order to develop good taste…just ask Francois Truffaut) and sadness. It’s a very fine film for what it is, and I have nothing to say against it except that I didn’t have a very good time watching it, but that’s me. I just can’t stand the broad, relentlessly peppy energy that family-friendly animation necessarily traffics in, and that’s fine. Some are calling Inside Out Pixar’s best ever, which all but assures a Best Animated Feature Oscar nomination and very possibly a win nine months hence. Let it go at that.

I realized a few minutes ago that I’m either losing or have altogether lost the ability to process life on its own terms, or at the least that a tendency to absorb things from my compulsive columnist perspective is gaining the upper hand. From my bedroom window I was checking out a view of Cannes’ Old Town (i.e., “Le Suquet“) and the radiant blue sky and the rooftops with their century-old clay tiles, bathed in the bright afternoon light. As good as it gets. And then I tapped the windowsill with my left thumb. Yes, I’d just tried to zoom in on the view by tapping my Apple trackpad. Had to laugh. 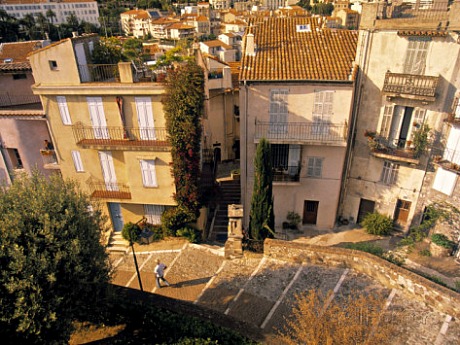 22 Comments
Bombs Is A Bust

To me Joachim Trier‘s Louder Than Bombs, an ennui-laden, Euro-style Ordinary People stuffed with the usual suburban, middle-class downer intrigues and featuring one of the most reprehensible teenaged characters in the history of motion pictures, felt contrived and gently infuriating. Too many aspects felt wrong and miscalculated or even hateful, and once the tally reached critical levels I began to sink into my usual exasperation (faint moaning, leaning forward, checking my watch).

Bombs is basically about a father and two sons grappling with the death of their wife/mother, and the dysfunctional behavior that emerges in her absence. Dad, a Long Island-based high-school teacher, is played by aging, overly sensitive, watery-eyed Gabriel Byrne. Son #1, a mild-mannered college prof and mystifyingly irresponsible young dad, is played by Jesse Eisenberg, wearing a bizarre straight-hair wig instead of his usual curlies. Son #2, the above-mentioned demon from Hades, is played by Devin Druid. Isabelle Huppert plays the dead wife/mom — a renowned, N.Y. Times-endorsed war photographer who died some months ago in a local highway accident.

I’m re-reading that hacked Sony email written by Sony marketing exec Michael Pavlic about Aaron Sorkin‘s Steve Jobs script: “It’s brilliant. It’s perfect. There are marketing liabilities. It’s long, it’s claustrophobic, it’s talky, it could be a play, it risks being all one medium close-up, it’s periody…a mediation on Jobs himself. It’s insistent upon itself, it’s relentless. I kept begging for someone to walk outside, for some daylight, for an opening.

“But Sorkin is so brilliant with the structure. Of course, at the film’s end he gives you that break into the parking lot. A convenient door to a different world. Just when Jobs lets up, the script finally breathes for the first time. It’s really spectacular. All obvious stuff but I’m a sucker for layered, thoughtful filmmaking. I believe it will be brilliant. This is the kind of film that makes me thankful for movies, and they’re few and far between these days.”

It’s 9:20 am in Cannes, and I don’t see the final Mad Men episode on my iTunes feed. (It’ll show up sometime today.) I’m therefore in no position to talk, but so far the general reaction seems to be one of mild dismay. Nothing close to Sopranos-level befuddlement but something along the lines of “uhm…that’s it?” Yes, I’ve been watching the series all the way through and I know that Matt Weiner has never been one to whip up a story lather. It’s not in him. But most of us wanted, in the words of Eddie Felson, some kind of “nice clean pocket drop.” Was “Person to Person” that?