The 12:15 am screening of Gaspar Noe‘s Love broke about five hours ago, or roughly 2:35 am. I’m not about to disregard Guy Lodge’s reaction. Then again Variety’s Peter Debruge admires Noe for the emotional exposure aspects. The PLaylist‘s Jessica Klang calls it “hardcore” but “soft-hearted,” and says “there are no winners in the game of defending Love because there are many, many, many things wrong with it, any one of which would be cause enough to reject the film outright. It is snoozingly overlong and almost comically self indulgent…but a softer Noe (not a hard-on pun, I promise) does not necessarily have to be a bad thing.” Update: My 11 am Salle Bazin screening is about to begin.

Today’s plan to see Brad Bird‘s Tomorrowland at Cannes’ Olympia plex was scotched when I realized only dubbed-in-French versions are being shown. Hollywood Elsewhere will not post a review concurrent with tomorrow’s U.S. opening. My only option is that a version originale version of Zeme Zitrka will be playing at Prague’s Cinema City plex, which I could see Saturday night or Sunday. Pic is currently 59% on Rotten Tomatoes and 62% on Metacritic. Those numbers will probably drop by tomorrow afternoon. 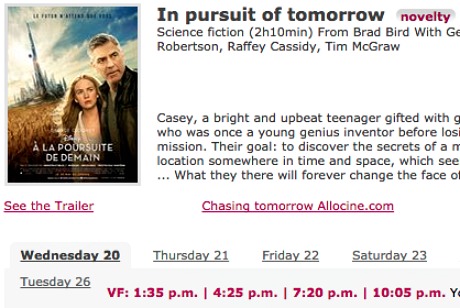 Earlier today Brigade’s Adam Kersh invited me to a gathering for Krisha director-writer Trey Edward Shults and his two, family related costars, Krisha Fairchild and Robyn Fairchild, at Nolan’s Irish Pub (6 rue Buttura, Cannes). Nothing snooty, pretentious or aggressively French about this place — LexG could walk right in and comfortably order 13 or 14 beers and feel right at home. Variety‘s Justin Chang posted the following from SXSW on 3.19.15: “An especially fraught Thanksgiving holiday brings a woman’s troubled, booze-soaked history into blistering yet compassionate focus in Krisha, an intimate and unnerving character study that marks a ferociously impressive feature debut for 26-year-old multihyphenate Trey Edward Shults. The winner of the grand jury award for narrative features at SXSW, [pic] reveals an elusive, formally sophisticated storytelling approach that neatly sidesteps the usual addiction/dysfunction cliches, its stylistic experimentation anchored by a subtly wounding performance from Krisha Fairchild in the eponymous lead role.” On 5.18 it was reported that A24 has acquired Krisha plus Schults’ next — a horror flick. 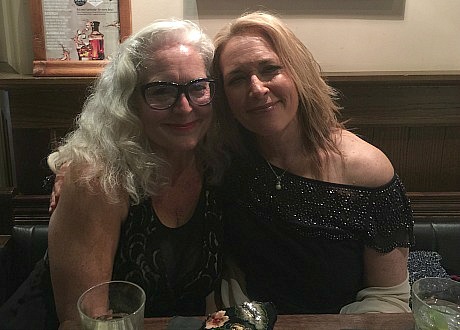 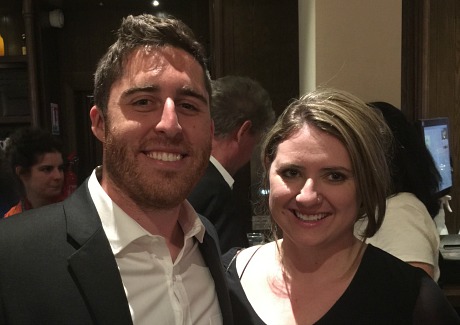 Less than two months after premiering at the Cannes Film Festival (i.e., last Saturday), A24 will open Asif Kapadia‘s Amy, a highly praised chronicle of the British singer’s 27 years of triumph and struggle, in New York and Los Angeles on 7.3 and then nationwide on 7.10. “Watching Amy, part of me is convinced she just wasn’t made for this world. She lived the way she did, much of the time miserable, but also reaching creative peaks most of us could never imagine. Were alcohol and bulimia necessary components to make that happen? It’s not a very uplifting conclusion to make, but a movie like this may give you second thoughts about enjoying the work of a troubled performer without at least saying thanks.” — Vanity Fair‘s Jordan Hoffman, posted on 5.18.

The bold thing would be to attend tonight’s 12:15 am screening of Gaspar Noe‘s Love, which is apparently porny and cummy in a serious, artistically defensible sort of way. All the festival nuts will be there and at least I’ll have it out of the way when it’s over, but I don’t know how good I feel about stumbling home at 2:30 am and getting maybe four hours of sleep, if that. But I might do it anyway. I haven’t been to a midnight screening in a long time. If I start to feel like it’s not quite worth losing sleep over I’ll just bolt and catch it at a more reasonable hour tomorrow, and nothing will have been lost. Update: Forget it — watching Love tomorrow morning in the Salle Bazin at 11 am. Tonight I saw a 10:30 pm market screening of Denis Gamze Erguven‘s Mustang, which I didn’t find arresting, in part due to the Turkish soundtrack with French subtitles. 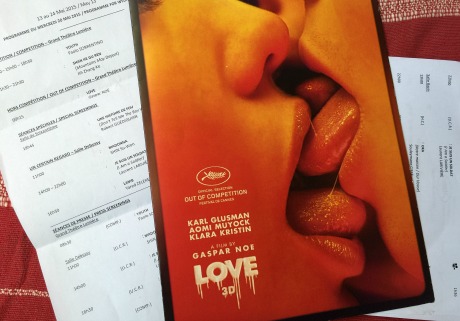 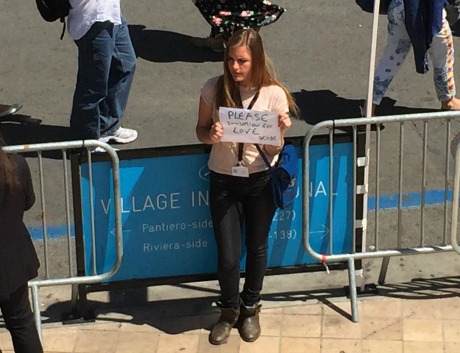 I know I have to see Hou Hsiao-Hsien‘s The Assassin during my stay in Cannes, but I just couldn’t make myself catch this evening’s 7 pm showing. I told myself it was because I’d napped for two hours and woken up slowly and took my time writing my Youth review, and because I wanted to finish it properly before running out at 6:30 pm, and that was true to a large extent. But if I didn’t have that excuse I’d have made up another. My loathing for Asian martial arts cinema led me years ago to pledge to never again submit, but I’ve been goaded by some in the HE community into manning up and seeing this thing and so I will reluctantly do so. But it feels so good right now to have ducked out, like playing hookey from school when I was 12 or 13. I’ll catch The Assassin at Friday afternoon’s Salle du Soixantieme screening. Update: The Guardian‘s Peter Bradshaw attended this evening and is basically calling it masterfully composed but an elusive firefly that’s a bit hard to follow. 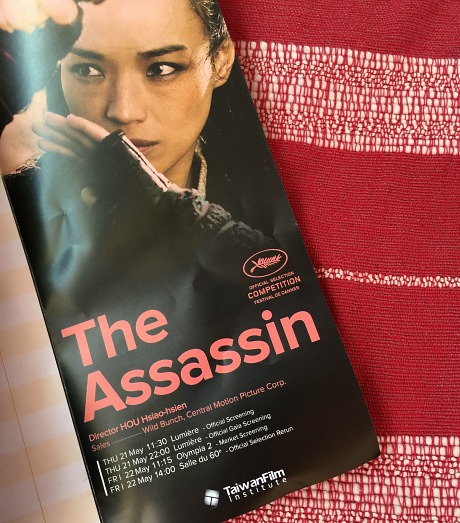 Paolo Sorrentino‘s Youth is a visually poetic, beautifully captured, symphony-like film, which is what Sorrentino does, of course. This has been his signature style in The Great Beauty and Il Divo (let’s ignore This Must Be The Place for now) and here’s the same tray of gourmet delights — deliciously photographed, serenely scored, composition for composition’s sake, drop-dead delectable, etc. And at the same time Youth is rather languid and swoony and a touch melancholy from time to time, and dryly amusing whenever Michael Caine and Harvey Keitel chew the fart fat while walking in the hills or sitting in a hot tub or sipping tea. But this is mostly a film that celebrates (advertises?) Sorrentino’s gifts as a visual composer.

And I’ll tell you something. After a while I wanted a respite from all the beautiful framing and the luscious, perfectly lighted Swiss scenery. I wanted Caine and Keitel to take a train to Bern or Zurich on some pretext and hit a topless bar or something, if only for a few minutes respite from Sorrentino Land, which — don’t get me wrong — is a fine, rapturous place to be but which can feel, after a time, a bit narcotizing. You could even say that it offers a kind of confinement. It’s not that I don’t value it. I’m not an idiot. I’ve been savoring fine cinematography, editing and production design all my life, and I know what goes.

The story, wholly subordinate to the visual scheme, is about a couple of well-heeled old pals — a retired composer and conductor (Caine) and a hard-working 70something film director (Keitel) — hanging at a Swiss spa (near Davos) and acridly contemplating the indignities of age and the slow ebbing of vitality and diminishment of their lives yaddah yaddah, and to some extent the lives of their children. With some attention paid to Caine’s daughter-assistant (Rachel Weisz) and a young American actor (Paul Dano) famous for playing a super robot but who’s now preparing for a new role, and to Keitel’s longtime creative collaborator (Jane Fonda) who’s expected to star in his latest but drops by the spa to deliver some bad news.