8:17 pm (Prague): Palme d’Or: Dheepan, dir: Jacques Audiard. Wells reaction: Kind of an odd call. Except for the shoot-out ending Dheepan is a very decent film — touching, honestly told, nicely shaded. But it’s far from Audiard’s best. The Palme d’Or should have gone to Son of Saul and Carol should have won the Grand Prix. 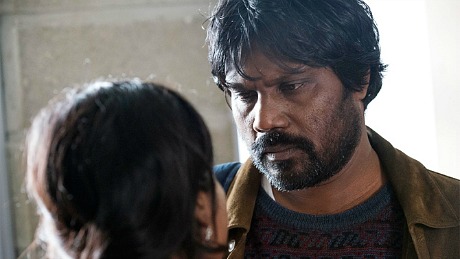 7:55 pm (Prague): Best Actor: Vincent Lindon, The Measure Of A Man. Wells reaction: Didn’t see it but good for Lindon, a solid, subtle actor who’s been inhaling cigarettes for decades.

7:52 pm (Prague): Jury Prize: The Lobster, dir: Yorgos Lanthimos. Wells reaction: What is this, the attaboy award for an interesting first hour? I respected The Lobster during the initial stages and then gradually came to despise it the longer it went on, and they’re giving it a fucking Jury Prize?

7:49 pm (Prague): Best Actress: Rooney Mara, Carol and Emmanuelle Bercot, Mon Roi. Wells reaction: Rooney won over Cate Blanchett! I thought the two of them should split the Best Actress award. This means the Weinstein Co. can’t run Rooney for the Best Supporting Actress Oscar…right? Well, they can but I wouldn’t agree. Bercot was sufficient in the okay-but-nothing-to-get-excited-about Mon Roi so I don’t know what this is about.

7:47 pm (Prague time): Best Screenplay: Chronic, written by Michel Franco. Wells reaction: Uhhm…okay. If you guys say so. But what about that ending? You can’t just have a car come along and do something that cars sometimes do…that’s cheating. Definitely not good writing. I thought that the pacing of Chronic was way too slow, but that’s not a comment on the writing. Keep in mind that Leviathan‘s screenplay won this award last year so this may be, in the jury’s eyes, a consolation prize.