The 4DX experience was a big reason why I surrendered to San Andreas, which I saw on an IMAX-sized screen at Prague’s Cinema City Novy Smíchov. 4DX isn’t just about seats that shake and tilt and vibrate in synch with the action (which is what the D-BOX experience more or less delivers) but facial air jets, misty water sprays, leg ticklers, back pokers, fog simulators, scents and warm air. If, as I wrote last April, you’re just looking for a mindless ‘wheee!’ experience at the movies, 4DX is the way to roll. You don’t have to be too thick to understand the transcendent joys of real cinema — you just have to relax and embrace the dumb and go with it. And it’s cool — the perfect physical compliment to watching submental destruction unfold for the better part of two hours. (San Andreas will play in 4DX at Regal Cinemas LA Live starting Friday.) 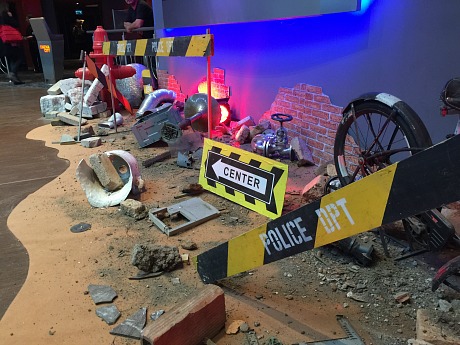 Special San Andreas rubble display in lobby outside 4DX IMAX theatere inside Cinema City Novy Smíchov, which is a little bit south and about six blocks to the west of the Vltava. 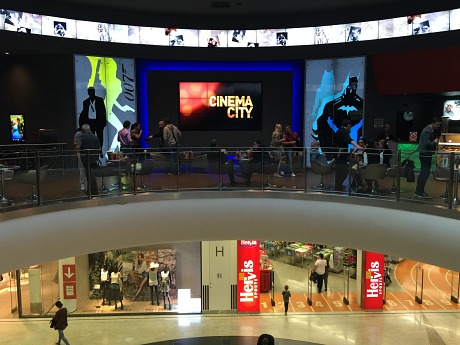 There’s a moment when star Dwayne Johnson makes a sharp hairpin turn in a speedboat on San Francisco bay, whipping a wave of water into the air and at that very instant I was hit in the face by a spray of cool mist…bravo!

The way dozens of serious skyscrapers collapse and disintegrate and topple over like bowling pins is amazing. They aren’t made of steel beams and reenforced concrete, these structures — they’re made of powdered concrete, sheet rock and beach sand.

I love that San Andreas throws in a tsunami at the end of Act Two. A rising wall of water, 400 or 500 feet high, just to the west of the Golden Gate Bridge which Johnson and Gugino have to try and vertically surf a la The Perfect Storm. Love tsunamis! And you’re saying to yourself, “Wow, Peyton and his team are really going for it.” If only they’d decided to throw in Godzilla and maybe a couple of Guillermo del Toro‘s kaijus from Pacific Rim and maybe an army of zombies along with Dracula, Frankenstein and the Wolf Man running around…you know? This is a movie that explains the new rules to Roland Emmerich: “Ya gotta destroy everything, bro…gotta go ALL IN, go FUCKING NUTS…but no dead bodies. Kill as many buildings and bridges as you want, but leave the people alone.”

If I have any complaints it’s the fact that San Andreas is, in a sense, not cruel and vicious enough in its decisions about who dies. Most disaster-porn films allow people with courage and character to live, and punish people without these qualities (i.e., cowardly scumbags) by killing them. It’s obvious very early in the game who’s going to die in San Andreas, but it’s only one guy. A good disaster film should kill at least four or five scumbags if not more. I have a problem with the fact that no nice people in San Andreas die at all. Which, of course, is what would happen if any kind of bad-ass earthquake struck. Good folks would get crushed or suffocated or roasted to death and God would just shrug and say, “Them’s the breaks.”

Irwin Allen understood this. Good people died in The Poseidon Adventure (including its star, Gene Hackman, who was playing a liberal man of God) and two perfectly nice women, played by Jennifer Jones and Susan Flannery, fell screaming to their deaths in The Towering Inferno. 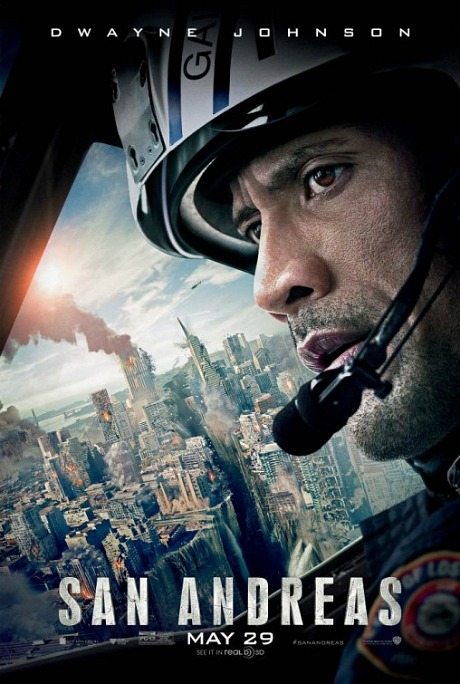 John Guillermin directed Inferno but Allen was the producing maestro, and he and Guillermin were on the same page, both trying to adhere to the standards of ’70s cinema and trying to deliver at least semi-digestible realism. I can’t believe I’m praising one of the tackiest, least sophisticated guys to ever make big-time movies but I am. Allen half-respected realism and physics.

On top of which — I have to say this because it’s real — there’s also the diverting Daddario. She’s done this and that but is best known for a sex sequence with Woody Harrelson in episode #2 of True Detective. Her San Andreas character, Blake, is a little blander. She’s initially portrayed as smart, strong and presumably resourceful but over and over Peyton and his screenwriters make her play the damsel in distress who needs to be rescued. How to discreetly and delicately describe the thing I’m trying to get at? If you take note of a woman’s rack (especially when she’s wearing a tight reddish tank top) you’re instantly branded as a pig and a beast with steam coming out of your nostrils. But Peyton and the San Andreas wardrobe person knew exactly what they were doing with Daddario and so did Daddario so don’t tell me. And I’ll tell you this: when the lights came up I turned to the guy I saw it with (Expats.cz editor and film critic Jason Pirodsky) and said, “Alexandra Daddario, right?”

Incidentally: There’s a ridiculous rescue scene in the very beginning in which a 20something blonde accidentally drives off a curving mountain road and tumbles down the side of the mountain, smashing and crashing and somersaulting like Vin Diesel and whatsername did in Furious 7. People routinely die from body trauma resulting from accidents that involve a small fraction of what these two tumblings amount to, and yet the blonde winds up conscious with only a few scratches and bruises. On top of which her car has decided to adhere to a sheer cliff like velcro or an insect. And then along comes Johnson with his rescue team in a chopper and all is well within a few minutes.

With this sequence Brad Peyton proves himself to be just as much of an enemy of action logic as Furious 7‘s James Wan. These guys are the evil flying monkeys of 21st Century action cinema and the worst nightmare of guys like George Miller and fans of classic action montage like myself.

May 27, 2015by Jeffrey Wells36 Comments
« Previous post
Uncle Bernie By A Country Mile
Next post »
Too CG-ish, Cliffy, Stunty, Furious 7-ish…No Thanks